Oklahoma farmer Merlin Schantz is interested in conserving water and energy as well as being a good steward of the land and resources.

That’s one reason he — and certainly other farmers — have agreed to participate in a unique program that looks at both the water and energy consumption related to irrigation.

“I saw this as a good opportunity to get some comparisons between the systems I had to discern what methods were being the most efficient,” said Schantz, whose operation is based near Hydro.

The opportunity the longtime producer is referring to is the Western Oklahoma Irrigation Water and Energy Audits. As part of the audit program, Oklahoma State University researchers Saleh Taghvaeian and Scott Frazier, along with a team of graduate students, analyze growers’ energy and water consumption during irrigation.

Frazier, OSU Cooperative Extension energy management specialist, added that this project is about measuring, and hopefully improving, irrigation efficiency in the state.

“There is an adage in engineering that says one cannot improve what you cannot measure,” Frazier said. “This project is about determining the current state of Oklahoma irrigation efficiency and how to improve it if possible.” 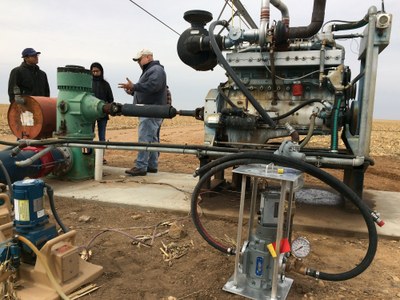 While the researchers initially relied on their contacts to connect with interested producers, now word of mouth is helping to fuel interest in the project.

Since debuting the effort about three years ago, they have worked with some 20 producers to complete audits on 26 systems throughout the Panhandle and western Oklahoma.

“It’s a no cost program and it’s through a university so they trust us,” Taghvaeian said. “We go to some really remote areas and we show them how many dollars they save. To me, it’s having a really positive impact on rural Oklahoma.”

A single audit can take anywhere from 2 hours to a full day depending on the type of system. In addition to examining the energy efficiency of the pump, the amount of water flowing from irrigation nozzles along the entire quarter-to-half-mile span of the system is measured to determine if irrigation is uniform.

After the audit is finished, the producer gets a comprehensive report that includes data such as usage; the depth of their well; potential monetary, energy and water savings; and a slate of helpful recommendations.

Meanwhile, the researchers receive critical data and statistics to further their studies.

“We thought it’d be kind of unique to combine energy efficiency with water efficiency,” Frazier said. “The difference between our program and what most other states do is they look at the energy part of it. This has got Dr. Taghvaeian doing the irrigation efficiency and we combine that with the energy. In other cases, it’s either one or the other, it seems, but this actually puts it together and reports three things, including the sustainability.”

At first, Taghvaeian and Frazier viewed the audits as an avenue to generating important research while helping producers enhance their bottom lines. But, as word has spread about the program, it has attracted growing interest as the researchers are now fielding calls from the Natural Resources Conservation Service and neighboring states.

Not to mention the energy cost savings possibilities keep the door open for strong ongoing producer interest, which then leads to introduction of water savings opportunities.

After using seed grants from the OSU Division of Agricultural Sciences and Natural Resources as well as the U.S. Geological Survey through the Oklahoma Water Resources Center to launch the project, the program also recently earned a $20,000 gift from Tulsa-based utility Public Service Company of Oklahoma to further the research. 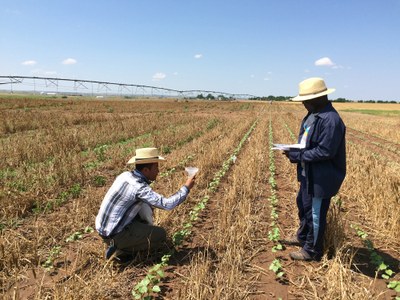 “If you think about it, the peak of irrigation is during the peak summer months when utilities are under a lot of pressure from air conditioning. During the winter months, there’s no irrigation going on,” Taghvaeian said. “Utilities also have an interest in improving the efficiency of energy usage. It keeps their costs down as well as the consumer’s costs. It’s really a win-win situation.”

Even as audits are ongoing, Taghvaeian and Frazier have begun looking ahead. One of the next steps for the project is to begin exploring how irrigation systems behave over time and in near real time.

The research duo also plans on more deeply delving into the issue of sustainability.

“These audits are snap shots, which are giving us good information. The next step is to see how these systems behave day-to-day,” Frazier said. “We’re also trying to get a handle on sustainability. In other words, if you flood a field by overapplicating, what happens then? What’s the impact to local air, land, water and groundwater? What’s the impact of doing this correctly or incorrectly?”

As for Schantz, he is trying to do things correctly, and considers the data he received from participating in the audit last year as an important building block in a larger plan for his operation.

“We’re collecting yield data right now. We’re doing grid soil sampling. We’re in the process of trying to collect as much information on what’s going on out there in the field. Then we’ll start adjusting our operation and programs off that,” Schantz said. “The bottom line is I’m interested in saving water, but I’m interested in getting the greatest dollar return for every gallon of water I pump.”

Noting agriculture is the largest user of fresh water in the world, United States and Oklahoma, Taghvaeian said it’s in everyone’s best interest if the industry becomes more water and energy efficient.

“In Oklahoma, more than a third of our total fresh water use is for irrigated agriculture. If we are more efficient with it and can conserve more of it, that helps everyone, not only folks who use it for irrigation purposes,” he said. “Energy is the same way. If I’m a big energy user and it’s a hot July day and I need to turn on my pump to water my crops, it comes at the cost of someone else who needs their air conditioning or something else. We’re all in this together.”

To put an even finer point on it, Frazier said recent research in Kansas has suggested the Ogallala Aquifer water level lowering might be mitigated by modest reductions in withdrawal rates.

“Some of this reduction might be possible by increasing the efficiency of the irrigation systems,” Frazier said. “So, this is applied research we feel is important.”