A Symphony of Soil Signals in Wheat Science

This month, scientists at Washington State University unveil a new high-tech tool that reveals secrets in the soil for healthier wheat. Researchers in the Wheat Health Genetics and Quality Research Unit Tuesday will cut the ribbon for a new, advanced mass spectrometry system.

The instrument detects and identifies molecules based on their mass, allowing the team of university and USDA-Agricultural Research Service scientists, for the first time, to study the metabolome of wheat—millions of tiny compounds involved in the symbiosis of wheat, soil and microbes. Their discoveries could help farmers raise crops that are highly resistant to devastating root diseases and environmental stresses.

“In wheat, most of the action goes on below ground, out of sight,” said David Weller, plant pathologist and head of USDA’s Pullman wheat research team. He studies how thriving roots and healthy soils protect wheat from disease.

“This new mass spectrometer helps us understand the chemical symphony going on in the roots,” he said. “It’s been a black box up until now.”

Signals in the Soil

Weller’s team sees promise in the natural antibiotics found in the symbiotic zone of roots, soil and microbes, known as the rhizosphere.

“In the soil, organisms use chemical signals to communicate,” said Robert Bonsall, a senior scientist at WSU who has studied the rhizosphere for nearly 25 years. “When a plant is attacked by a disease, it sends out an SOS. Bacteria that produce antibiotics come to the plant’s rescue.”

To understand this exchange, Bonsall and Weller look for chemical clues called biomarkers.

“All of these compounds, some from the plant, some produced by micro-organisms, dramatically affect the health of the roots and the productivity of the plant,” said Weller. “It’s a beautifully coordinated symphony of chemical signals, protecting the plant and helping its growth. Hundreds of thousands of organisms contribute to it.” 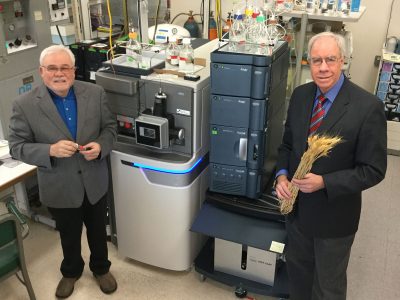 The Pullman wheat research unit’s work with Waters goes back decades. Bonsall and Weller say their partnership with the company’s engineers and experts has been critical to their studies.

“Our collaboration with Drs. Weller and Bonsall illustrates how the Synapt system’s enhanced capabilities will enable the laboratory to ‘decode’ more soil components than ever before in the rhizosphere,” said Ken Rosnack, principal business development manager at Waters Corporation.

“This is the first time that ion mobility—a feature of the Synapt system which distinguishes molecules based on their size, shape, and ionic charge—has been applied to this area of biomarker research,” Rosnack added. “We’re very excited that WSU will use this technology to probe the soil metabolome and advance our understanding of rhizosphere microbiology and plant pathology.”