Growers should be much more concerned about sulfur (S) availability in a wet year than a dry year, but yield potential of our crops is so great, and the natural inputs of S from precipitation is so low that in soils with low (less than 3%) organic matter, S can be a problem in dry years, also.

Mineralization of organic matter/residues is much less in dry soil conditions, which probably adds to the likelihood of S deficiencies. The S deficiencies I have seen so far are not pandemic as they have been the last couple years, but are evident on higher landscapes, usually sandy loam/loamy sand soils with low organic matter, as seen in the landscape figure attached to this article.

The individual plant symptoms are yellowing in the upper leaves. In the individual plant image also attached to this article, spotting on the leaves may be due to Cl (chloride) deficiency, which would also be most likely in sandier soils in upper landscape positions. 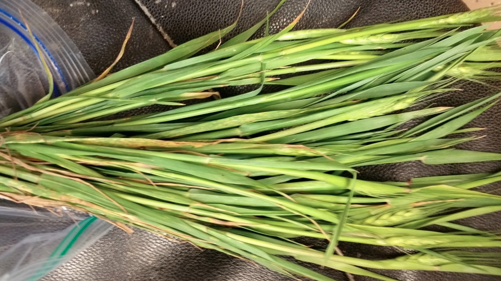 A paired plant sample analysis (one sample from distressed area and one from green ‘good’ area) would confirm the diagnosis of S and possibly Cl.

The wheat in these images is too far along in development to help with S addition. If generous rainfall was anticipated over the next couple weeks, grain size and protein might be enhanced with S application, but on these landscapes the yield will be reduced due to water stress, so S application would probably be a wasteful expense.

However, this image should serve as an alert that later season crops, particularly corn, would also be susceptible to S deficiency in similar soils. If a sulfate/thiosulfate source was not applied at adequate rates earlier in the season, a side-dress/top-dress application on likely responsive soils would be wise.

Dual-Purpose Canola: An Opportunity for Extending Forage in a Dry Year