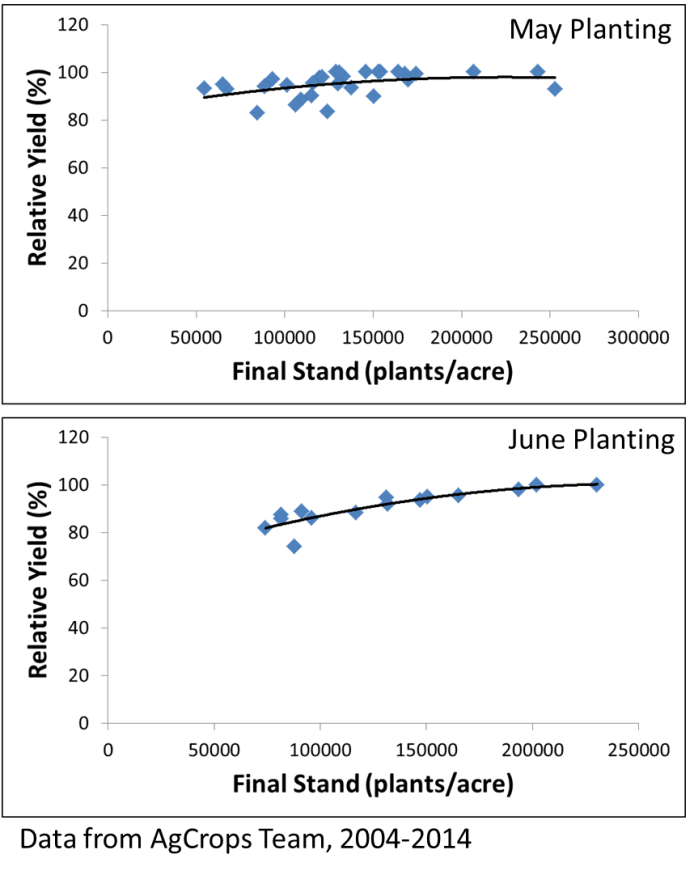 Planting date (both too early and too late) can reduce soybean yield potential. In 2013 and 2014, we conducted a planting date trial at the Western Agricultural Research Station near South Charleston, Ohio. In both years, soybean yield decreased by 0.6 bushels per acre per day when planting after mid-May. (Note: Soil temperatures were above 50 F at each planting date.) The greatest benefit of planting May 1 to mid-May is canopy closure, which increases light interception, improves weed control by shading out weeds, and helps retain soil moisture.

Planting too early (before field conditions are adequate) comes with a risk. Factors such as damping-off and pressure from bean leaf beetle are concerns to keep in mind, as well as the possibility of a late spring frost. (Our early May planting date in northeastern Ohio in 2013 was damaged by bean leaf beetle and two frosts that occurred mid-May.)

Before heading to the field, consider the conditions you will be planting into. Soybean germination begins when soil temperatures reach 50 F and moisture is present at the planting depth of 1-1.5 inches. With these conditions, emergence can typically be expected 2-3 weeks after planting.

Do not plant early if the soil is excessively cold or wet. Slower germination and compaction can negate the benefits of the earlier planting date. Timely planting is critical for maximizing yield in soybeans, but using good judgement on field conditions plays a role that is equally important to determining yield potential.

What is the optimum soybean seeding rate?  On-farm research conducted by the AgCrops Team from 2004-14 indicates that 116,000 plants per acre at harvest resulted in a relative yield of 90% (i.e., if 100% yield is 50 bushels per acre, 90% yield is 45 bushels per acre) when soybeans were planted in May. In the seeding rate figure, the relationship between yield and final stand is a relatively flat line indicating that soybean can yield well over a wide range of seeding rates. (Note: All of the seeding rate work was conducted in either 15- or 7.5-inch row width.)

In Ohio, most soybeans are planted in row widths of less than or equal to 15 inches. Soybeans grown in narrow rows tend to out-yield soybeans produced in wide row width (30 inches) due to increased sunlight interception in narrow rows. Row width should be narrow enough for the soybean canopy to completely cover the inter-row space by the time the soybeans begin to flower. 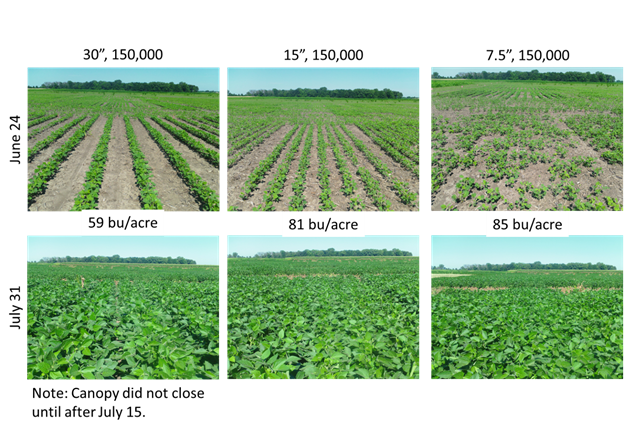 However, the soybeans planted in 30-inch rows did not achieve canopy closure until after July 15. The 30-inch plot pictured above yielded 59 bushels per acre while the 15- and 7.5-inch plots pictured yielded 81 and 85 bushels per acre, respectively. With funding from Ohio Soybean Council, this study will be repeated in 2016.

The Best Time to Sample Soil for Soybean Cyst Nematodes