The Agricultural Marketing Service reports fertilizer prices in its twice monthly Illinois Production Costs Report. In the Dec. 10 issue, the average price of anhydrous ammonia in Illinois is $650 per ton. This 2015 December price is $78 per ton lower than the $728 per ton in December 2014. The $650 price is the lowest price since 2008 when anhydrous ammonia was selling for $478 per ton (Table 1). 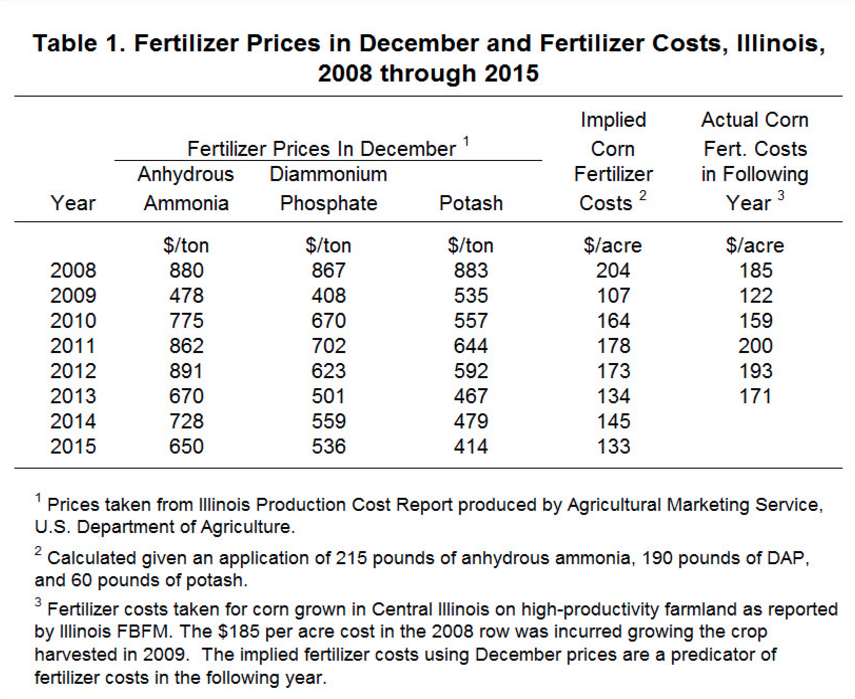 Fertilizer requirements come from the Illinois Agronomy Handbook. Amounts used in calculations are 215 pounds of anhydrous ammonia, 190 pounds of DAP and 60 pounds of potash. Resulting costs are shown in the "Implied Corn Fertilizer Costs" column of Table 1.

As one would expect, implied fertilizer costs using December prices are not a perfect indicator of fertilizer costs in the following year. December is only one month out of the year while fertilizer is purchased in many months. Moreover, quantities can vary from those used to calculate implied costs.

The final column of Table 1 shown actual fertilizer costs for central Illinois high-productivity farmland in the year following the calculation of the implied costs. For example, implied fertilizer costs using December 2008 prices is $204 per acre while costs incurred in 2009 is $185 per acre. Even given these differences, December prices are useful predictors of fertilizer costs in the following year.