A study featured in the most recent issue of the journal Weed Technology shows that post-harvest treatment of glyphosate-resistant Palmer amaranth can significantly reduce seed production and help to control the spread of the weed’s resistant traits.

A research team from the University of Tennessee treated one field after corn was harvested in 2012, and two fields after corn harvest in 2013, to evaluate the post-harvest Palmer amaranth control in corn and subsequent herbicide injury to fall-seeded, no-till winter wheat.

Palmer amaranth control was evaluated at post-harvest application timings of 7 and 14 days after application, using a scale of 0 (no control) to 100 (complete control) based on visual estimates compared with non-treated checks. Palmer amaranth seed was also collected from plants just before wheat planting. The researchers also evaluated wheat injury from pre-emergence herbicides at crop emergence, using a scale of 0 (no injury) to 100 (plant death) based on visual estimates of wheat phytotoxicity, compared with the non-treated check. 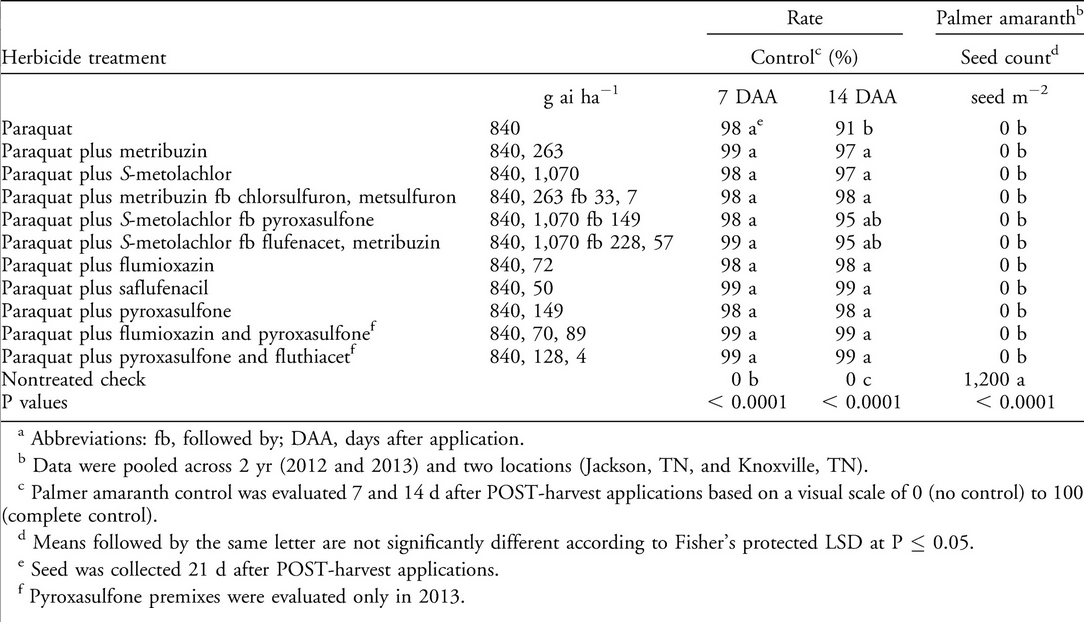 All treatments prevented seed production of glyphosate-resistant Palmer amaranth, even when weed control wasn’t complete. Replenishment of the seedbank was reduced by 1,200 seeds per square meter. Of these seed, more than 80% came from plants that recovered from damaged inflicted by the mechanical corn harvesting equipment. Germination percentage of Palmer amaranth seed collected after corn harvest was 70%. This suggests that in corn production in the southern region, Palmer amaranth severed near the soil line during harvest could still grow back and produce seed before the first frost.

Treatments that didn’t receive a pre-emergence herbicide application had no wheat injury on the basis of visual estimates, indicating there was no herbicide carryover from post-harvest application.

Effectiveness of Pre and Post Herbicides in Managing Glyphosate Resistance