Commercial pea growers stand to benefit from the release of Hampton, a new edible dry pea variety that resists some of the legume crop’s most costly scourges, including pea enation mosaic virus (PEMV) and bean leaf roll virus (BLRV).

“In the Pacific Northwest region of the United States, aphid-vectored virus diseases are very serious threats to pea and lentil production. The most serious here are PEMV and BLRV,” says Agricultural Research Service plant geneticist Rebecca McGee. “In bad virus years, either disease can reduce yields up to 80-90 %.”

Not only does Hampton resist both viruses — making it the first U.S. field pea of its kind — it also withstands the fungal disease pathogens that cause Fusarium wilt race 1 and powdery mildew. Indeed, Hampton’s unique package of disease-resistance genes, combined with its high yield potential and other desirable traits, prompted ARS to seek Plant Variety Protection, which grants developers of new varieties certain rights in how the seed is reproduced and sold.

According to McGee, conventional controls for viral diseases like PEMV and BLRV include spraying pea crops with insecticides to kill or repel the aphids that transmit the pathogens while feeding on the plants. However, genetic resistance is considered the most reliable, cost-effective, and environmentally safe approach to shielding the crops from such harm, adds McGee, with ARS’s Grain Legume Genetics and Physiology Research Unit in Pullman, Washington. 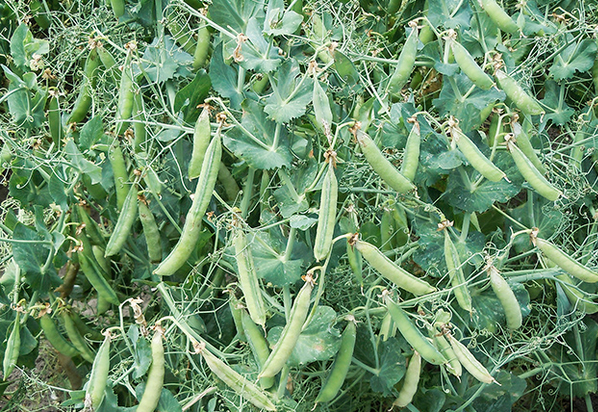 The Hampton, an edible dry pea variety, was developed to resist some of the legume crop’s most costly scourges, including pea enation mosaic virus and bean leaf roll virus.

In affected pea plants, PEMV symptoms manifest as stunted growth, translucent “windows” on leaf veins, blister-like lesions on leaflets and pods, deformed pods, and reduced yield. BLRV symptoms on peas include yellowing of young leaf tips, stunting, and leaf rolling. Besides seed yield losses, these viral diseases also deprive growers of an important grain-rotation crop that can cut down on synthetic fertilizer use, thanks to the legume’s symbiotic relationship with nitrogen-fixing root bacteria, or “rhizobia.”

Hampton owes its resistance, yield, and other valued agronomic traits to a top-performing population of sixth-generation offspring plants that were selected from a 2000 cross of two ARS pea breeding lines, PS810090 and PS510718.

Hampton matures in about 94 days and grows to 17 inches tall, producing high-quality seed with an average weight of 21 grams per 100 seeds. During yield trials from 2008-2013 at 40 sites in Washington State, North Dakota, Idaho, and Montana, Hampton produced seed yields that exceeded those of the commercial cultivars Aragorn, Ariel, and Banner by 12, 13, and 5 percent, respectively.

Hampton is intended for production in the Pacific Northwest and Northern Plains, but is particularly suited to the Palouse, a hilly, fertile region encompassing parts of southeastern Washington State, northeast Oregon, and northwest Idaho.

The Washington State Crop Improvement Association is handling inquiries for certified seed of Hampton, which should be available to growers in spring 2016.