Have you noticed some of your soybean plants wilting and dying out in your fields? Two diseases observed making an appearance in South Dakota soybean fields are phytophthora root and stem rot and stem canker.

Phytophthora continues to be one of the most damaging Dakota soybeans as this fungal pathogen (Phytophthora sojae) survives in the soil and in infected residue, causing poor stand establishment, as well as plants that wilt and die prematurely.

Disease Timing: Phytophthora can occur all season long. Seed decay (seed rot) and pre- and post-emergence damping-off, can occur when plants are infected at the seedling growth stage. Plants that have emerged and escaped damping-off may still be infected and may later show symptoms of Phytophthora infection when they are under stress (e.g. drought).

Symptoms: Phytophthora infection starts in the roots and progresses upwards on the plant stem above the soil line. A characteristic symptom of the stem rot phase of the disease is a dark brown color on the stem and lower branches (Figure 1.). Infected plants are often found in the low-lying areas of the field, but may also be hidden underneath the canopy of other plants. 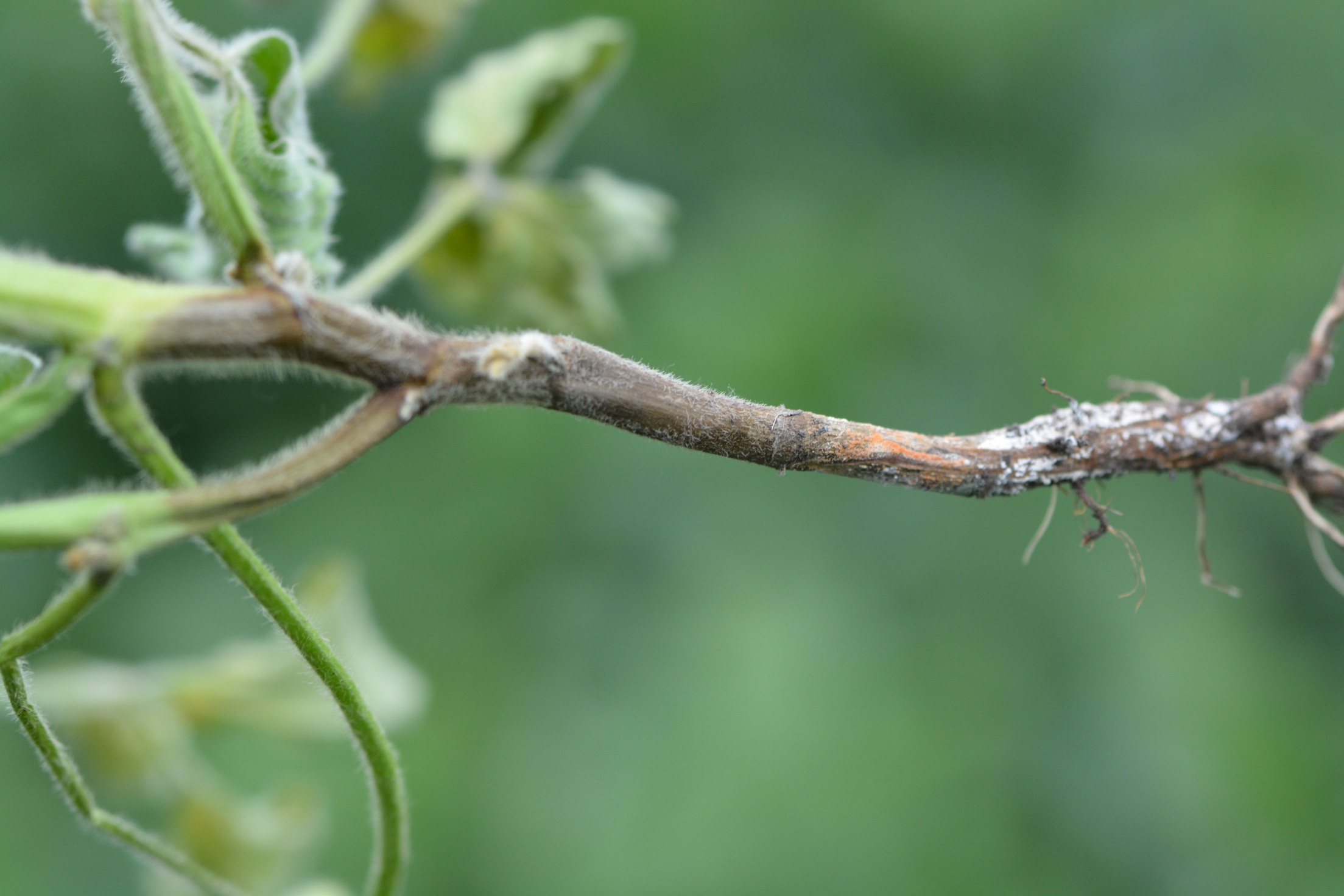 Figure 1. Note the brown lesion extending up the soybean plant from the soil line. This is a characteristic of Phytophthora stem root. Photo courtesy of Emmanuel Byamukama.

Phytophthora Management: Managing Phytophthora root and stem rot can be difficult simply due to the fact that there are many (more than 50) physiological races (genetic forms) of this pathogen found in North America with many of these races found affecting soybeans in South Dakota. One management option for Phytophthora is selecting plant varieties that have higher levels of field tolerance. Also, growers are encouraged to utilize varieties that incorporate different races, such as Rps1K, Rps3a, Rps6, or a variety with stacked resistance genes (several different races incorporated into the seed).

Growers are also encouraged to keep field records on fields that have had Phytophthora so they can evaluate the effectiveness of the resistance genes in the variety they have planted. Other management tools that growers can employ include improving soil drainage and avoiding soil compaction. Fungicide seed treatment is recommended for fields with a history of damping-off. Refer to the Soybean Seed Treatment section in the 2015 South Dakota Pest Management Guide for Soybeans.

Stem canker was a major disease in the 1950s and 1960s, but the use of less susceptible cultivars curbed this disease until 2000. Stem canker has been making resurgence in South Dakota, Wisconsin, Minnesota and Iowa, and has been found to reduce yields by 50-80%.

Symptoms: Reddish brown, slightly sunken lesions appear at the bases of branches or leaf petioles. These often expand longitudinally girdling the stem (Figure 2) leading to wilting and eventually death of the plant. Leaves remain attached to plant after death. After plant death, tiny black dots (perithecia) may appear on the stem. 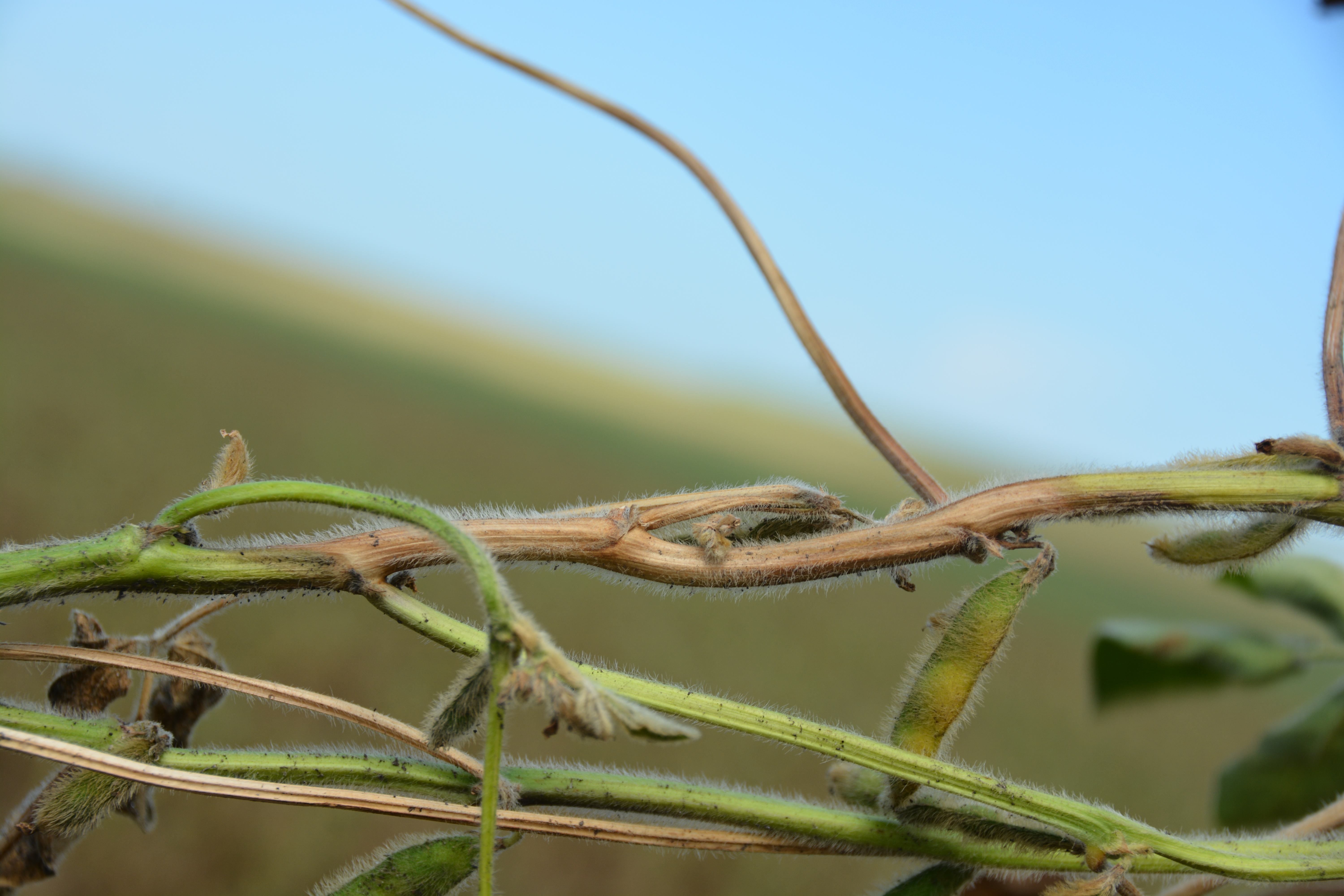 Stem Canker Management: Stem canker can be managed through accurate diagnosis and a combination of control measures. Use resistant or tolerant soybean varieties. Practice crop rotation in order to reduce the stem canker inoculum level. The risk for stem canker increases when soybeans are planted continuously. Consider applying a fungicide during the reproductive phases to limit disease severity.

Both Phytophthora and stem canker can survive on infected crop residue and in the soil. In order to make management decisions, you must identify what the disease problem is occurring out in the field. If you are unsure of what disease you are observing, please send a sample to the SDSU Plant Diagnostic Clinic.