Refuges are an important component of resistance management efforts to prevent or delay pest resistance to biotechnology. When planting transgenic Bt corn hybrids on your farm, following refuge requirements is mandated by the EPA and by product stewardship agreements with the seed companies that sell Bt technology. A refuge is simply an area of non-Bt corn; however, the refuge's total area, location and how it's managed are also important components.

So why is refuge compliance so important and how can it contribute to managing pest resistance and extending the lifetime of Bt products?

What is the Goal of a Refuge?

A refuge is an area of non-Bt corn that has been planted to produce susceptible insects that can mate with any resistant insects that emerge from the Bt crop. An essential aspect of the refuge is that you want to produce insects from this area. This concept may be counter to how growers and ag professionals are used to thinking, given so much effort goes toward reducing the number of insects coming from crop fields rather than producing them.

Acreage
The first step to refuge compliance is understanding the total acreage that must be planted to a non-Bt hybrid. Refuge requirements in Nebraska vary from 5-20% of the field. (In the southern U.S. where cotton is grown, refuges may be up to 50%.) Requirements for a given product can be found on the seed bag label or in the Handy Bt Trait Table.

For example, the seed bag label shown in Figure 1 requires a 20% refuge. If you plan to plant a 160-acre field, a maximum of 128 acres can be planted to this Bt seed and at least 32 acres must be a non-Bt refuge.

Placement
Deciding where to place a refuge is another important part of compliance. Bt corn targeting corn rootworms must have a refuge that is within or adjacent to the Bt corn, while refuges for traits targeting European corn borer can be up to ½ mile away. This difference is due to the mating behaviors of the two pests; rootworm beetles will not travel far before mating, so the susceptible refuge beetles must be near any resistant beetles emerging from the Bt field.

However, corn borer moths will fly longer distances prior to mating and can encounter refuge insects even up to ½ mile away.

There are several types of refuges and several ways to place them.

Structured Refuge
Structured refuges can be blocks or strips of non-Bt corn that are located within or adjacent to the Bt portion of the field. A few examples using center-pivot irrigated fields are provided below.

Integrated Refuge
An integrated refuge is planted using a seed mixture of both Bt and non-Bt seed at the appropriate ratio. Refuge-In-A-Bag (RIB) products can be purchased with the refuge seed premixed at the needed rate (typically 5% refuge) and planted normally, resulting in the refuge plants being located randomly throughout the entire field. 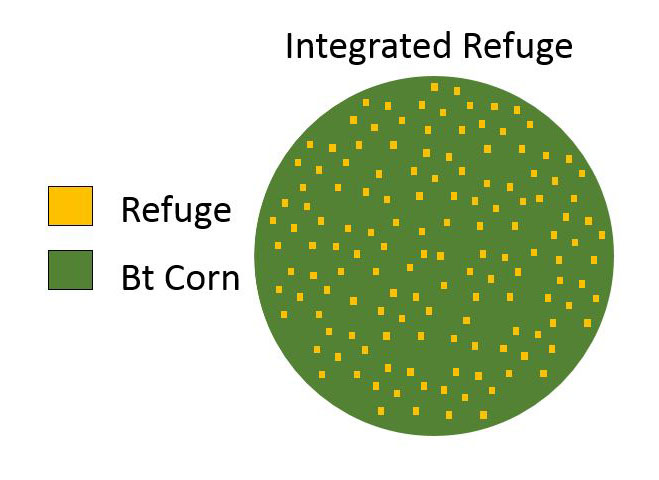 The refuge and Bt areas should be managed by the same person and follow identical agronomic management practices, including:

Irrigation can be a particularly important management practice in Nebraska. Pivot corners cannot be used as refuges due to the difference in plant and insect development that can occur between dryland and irrigated acreages. If insects do not emerge from the Bt and refuge at the same time to mate, the purpose of the refuge will not be achieved.

[Podcast] Why Cover Crop Acreage is Growing, and Important Rule Changes That May Reduce the Risk