Hot, dry conditions can wreak havoc on a field of soybeans. According to the National Center for Soybean Technology, “drought is the greatest threat to profitability.”

Work underway at South Dakota State University may change that.

Assistant professor Jai Rohila of the biology and microbiology department is uncovering the molecular mechanisms that lead to drought and heat tolerance. This will help breeders develop soybean varieties that can survive heat and drought.

“Ultimately our goal is to help the farmers in the field,” Rohila said.

To do this, he is working with University of Minnesota soybean breeder Jim Orf, who provided Rohila with two varieties of soybeans, one that has greater tolerance to hot, dry conditions, and another that is susceptible. The project, which began in 2010, is supported by the South Dakota Soybean Research and Promotion Council.

“Drought and heat are very complicated,” Rohila said, because multiple genes affect the plant’s physiological and biochemical response to environmental stressors. “I am going to build a bridge between the physiology and the gene discovery.” 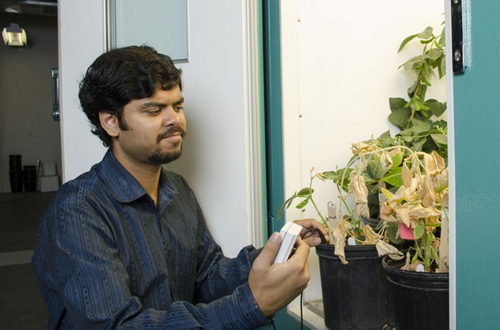 Graduate student Aayudh Das checks the soil moisture in soybeans that are subjected to heat and drought stress, as part of South Dakota State University research to increase the plants’ ability to withstand these environmental conditions. The project is supported by the South Dakota Soybean Research and Promotion Council.

By comparing the two soybean varieties, Rohila and graduate student Aayudh Das hope to identify the key genes that lead to increased tolerance. Genes regulate the expression of proteins and chemical signaling pathways that determine the plant’s response to heat and lack of water.

“We study not one gene at a time, but many,” said Rohila. “With a global approach, we can nail down many molecular players at a single time.”

Das has found 90 proteins that are differentially expressed during drought and heat conditions in the tolerant variety. These proteins then interact with enzymes that affect the plant’s metabolism including its ability to produce carbohydrates, lipids and various metabolites including amino acids.

A drought-stressed soybean plant, for instance, closes its pores or stomata to prevent water from escaping; however, this action has a cost—it limits the plant’s ability to take in carbon dioxide and ultimately to make the carbohydrates it needs, Das explained.

In comparing enzyme levels in the two soybean varieties, he identified two enzymes which are up regulated significantly in the variety that performs better under heat stress.

“Up regulation of these enzymes also protects other enzymes,” he said, which then helps the plant tolerate heat. “This was an unexpected discovery.”

Though the researchers have more work to do, Das explained that the next step will be to see if overexpressing these enzymes can further protect the soybean plant.

Understanding the Genetics for Drought-Tolerant Soybeans