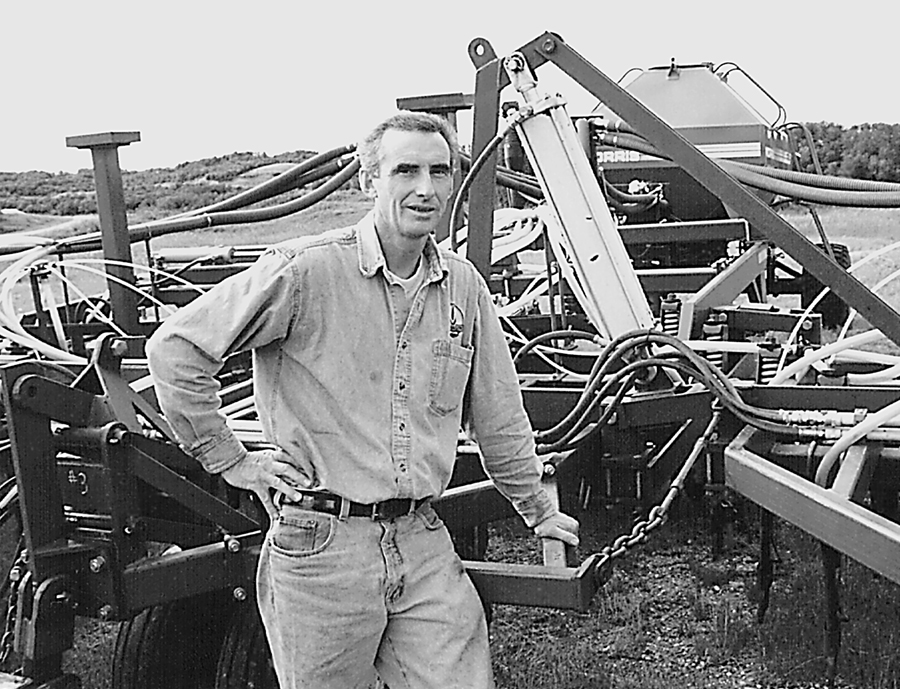 By Laura Rance posted on September 1, 1999 | Posted in Seeding & Planting

Bob Mcnabb's no-till wheat field just outside the western Manitoba community of Minnedosa was as lush and green as any in these parts. But there was still something noticeably different about the crop.

There was enough space between the no-tilled wheat rows to ride a bicycle.

That may seem odd to a casual observer, but for McNabb, who’s been sowing small grains, pulse crops and oilseeds in 12-inch row spacings for the past 5 years, it’s part of a perfectly natural progression.

The same intuition that led him into no-till 22 years ago began guiding him away from the industry standard of 6- to 7-inch rows for small grains toward progressively wider row spacings in the mid-1980s.

“It seemed to me that if we were to start making better use of the climate we were creating on the soil surface—the higher organic matter, the more residue on the surface, the enhanced microbial activity—all of those things that led to an enriched soil quality, that we should really try to cut down on the disturbance,” he says.

But knowing where you want to go doesn’t necessarily mean it’s going to be easy getting there. The biggest hurdle McNabb had to overcome was insecurity.

At the time, he was direct seeding with a Melroe Bettinson disc drill with a row spacing of 6 7/8 inches. In 1985, he somewhat apprehensively moved to an Edwards hoe drill with an 8-inch row spacing.

“It was incredibly difficult to make that change,” he…

Premium content is for our Digital-only and Premium subscribers. A Print-only subscription doesn't qualify. Please purchase/upgrade a subscription with the Digital product to get access to all No-Till Farmer content and archives online. Learn more about the different versions and what is included.
KEYWORDS Bob McNabb Dribble Banding fertility Melroe Bettinson Disc Drill No-TIll Wheat wild oats

Will Ultra-Narrow No-Till Corn Rows Work For You?

Check Out These No-Till Small Grain “Must Do’s”