Experience Is a Great Teacher

No-tillers in Sarpy County, Neb., are still benefiting from the experience Frank Cockerill gained by no-tilling 60 acres of corn and 10 acres of soybeans in 1975.

As the county’s first no-tiller, Cockerill taught many students through field days, slide-show presentations at meetings and by stimulating curiosity of neighboring farmers. Several of his students have achieved national recognition and one has won the National Corn Grower’s Contest in the no-till category several times.

“One of the better no-tillers in this county is Larry Timm of Springfield,” says Cockerill, who no-tills 800 acres of corn and soybeans near Gretna. “I had some terraced land next to his that had a slope of 18 to 30 percent in some spots. 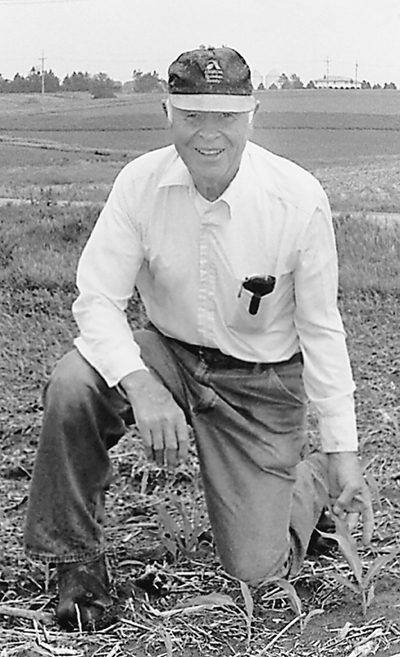 No-till has come a long way in the 23 years since Cockerill began. During his first year of no-till, Cockerill remembers weed battles.

“We had such light soil that we had to take literally thousands of soil samples to find organic-matter levels so we could set up a Bladex dosage,” he explains. “The dosage we used didn’t kill as well as ex­pected. The next year we increased it and the Bladex did its job.”

During these first two years of no-till, Cockerill gained the best advice he has for other no-tillers—get experience.

“Your best information will not come from the university, your neighbors or crop consultants,” he emphasizes. “Visiting with neighbors who no-till is a good way to start, but I have found that there is no exact way to no-till.

“What works for you is the method to follow. I think the most successful no-tillers are those that learn as they go along. Experience is a great teacher.”

Cockerill is always willing to try new ideas. For example, in the 1960s, he tried growing 20-inch soybeans.

“It didn’t work because we didn’t have the varieties to yield in the narrow-row width,” he explains. “Today it’s a whole new ballgame because there are better varieties available.”

With innovation and experimentation, Cockerill lets profitability be the judge of what ideas to implement. He offers the following suggestions he’s successfully tried.

• Stay updated on new technology, but analyze the payoffs before adopting new methods.

The precision farming idea has captured Cockerill’s curiosity and this fall his new combine will come equipped with a Global Positioning System (GPS). However, Cockerill doesn’t believe there’s going to be any immediate paybacks.

“GPS is more of a want than a need,” he admits. “I think it’s going to take four or five years of data to prove its worth.” Cockerill has been hesitant to begin grid sampling for this reason.

“In most of this hill ground you don’t have much difference in the soil composition,” he explains. “I just sent two soil samples to the lab and got a $60 bill.

“I can’t see how sampling fields in five-acre grids is going to have a quick payback when soil tests are expensive.”

Cockerill previously owned a fertilizer business and sold the root stimulant ASA. He offered producers a money-back guarantee if they didn’t get a yield boost.

“We never had to give a refund,” he says. “Yield increases averaged between 6 to 8 bushels.”

Although 1997 was a good year to have Bt corn because corn borer populations were high, Cockerill didn’t see much of a yield advantage because of an early October snowstorm.

“The Bt corn was standing so nice that we let it go until last,” he says. “Then we got a snow and lost a considerable amount because the plants were full of leaves and the heavy snow brought the stalks down.”

Cockerill applies Counter CR insecticide on all second-year corn fields. “Egg-laying insects love no-till because the ground isn’t disturbed,” says Cockerill. “Trash is a great place for them to lay eggs. Black cutworm is especially known for this.”

• Don’t get discouraged after one bad no-till year.

“Last year was one of the two years since we started that no-till wasn’t as good as conventional till,” he says. “The reason was the ground was in too good of shape.

“It was so soft that the coulters pushed the trash down into the seed furrow. Consequently, the corn germinated late from a lack of moisture and yield suffered.

“There are some people who left no-till just on this account. You can’t let one bad year let you forget no-till’s past success.”

If Cockerill gets frustrated with no-till, he remembers the early years when soil organic-matter levels were under 1 percent.

“Today, we have levels up to 3 percent,” Cockerill explains. “I’m positive that we’ll pass this farm down in much better shape than what we found it.”

Take the Next Step With Mature No-Till Fields

Taking the Lead in No-Till