Weed seeds don’t germinate after being pulverized by this unit pulled behind the combine.

Fed up with traditional means for getting rid of weed seeds when no-tilling small grains, Ray Harrington came up with a solution to overcome the mounting concerns with herbicide-resistant weeds.

The farmer from Darkan, West Australia, says it’s been common in Australia to pull an enclosed chaff cart behind the combine to collect weed seeds for later burning. Yet, Harrington felt burning was dangerous and not always effective since he often saw ryegrass seed blowing out of the carts.

As a result, he’s spent the last few years developing the Harrington Seed Destructor where both weed seeds and chaff flow into a trailer-mounted unit pulled behind the combine. The unit contains a screenless, high-speed impact mill that pulverizes the weed seeds so they can’t germinate.

Harrington says 5 years of testing by the Australian Herbicide Resistance Institute shows the weed-splitting unit kills more than 80% of weed seeds. Its own engine powers the unit, but he’s looking at using hydraulic or electric power on future units.

Bryan Young, a Southern Illinois University weed scientist, says the idea of controlling herbicide-resistant weeds mechanically while flowing through the combine has merit. 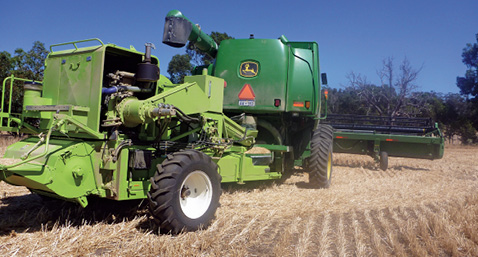 “Waterhemp is a small-seeded weed and I think we can screen these easily from grain as it moves through the combine,” he says. “You might be able to collect as much as 10 bushels of waterhemp seed while harvesting a 10-acre area.”

In addition, Young says John Deere engineers have indicated weed seeds could be captured with new combine innovations, but that the attachment would likely require another 10 to 20 horsepower.

But the big question is how much money farmers should be willing to pay for this method of weed control.

Young says combines are unfortunately known for spreading weed seeds. Some no-tillers are baling the residue coming out the back end of the combine to more effectively manage herbicide-resistant weeds.

“Our combines are spreading a lot of weed seeds,” says Young. “Farmers would like to find a way to control this situation and reduce weed-seed pressures on their field, so the weed-splitting concept would be a great idea.”

The cost of the Australian weed splitter for U.S. growers is expected to be around $160,000.

8 Tips for Preventing Weed Seeds from Spreading Via Combines

Weed Seeds and Their Longevity