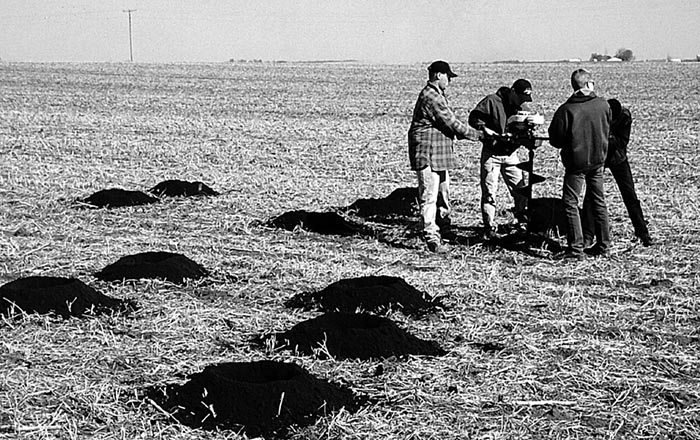 Making A Case For Switching To Spring Nitrogen Application

By Lynn Grooms posted on December 1, 2001 | Posted in Nutrient Management

Waiting to apply nitrogen has led this veteran no-tiller to trim fertilizer needs.

After two springs of seeing that fall-applied nitrogen levels had dropped as fast as a high-tech stock, Jim Andrew knew it was time for a change.

The switch from fall to spring application wasn’t made in haste. “I’m not a big believer in jumping into something too quickly,” he says. “Actually, we studied this for about 4 years, as ISU agronomist Alfred Blackmer has been conducting late spring nitrate nitrogen tests on the farm.”

Blackmer’s tests in both 1998 and 1999 indicated that most of Andrew’s fall-applied nitrogen had been lost over the winter and early spring months. For example, the 1998 tests indicated that there was less than 10 parts per million (ppm) nitrate nitrogen in the soil — after Andrew had knifed in 120 to 125 pounds of anhydrous ammonia the previous fall.

“This drove us to spring application,” says Andrew.

Andrew made spring anhydrous applications this year, applying 117 pounds of nitrogen per acre. Dry early spring weather was conducive to application, says Andrew, adding that the rains came in June after the crop had emerged. The no-tiller acknowledges that wet, cold early springs — common in the upper Midwest — can present application problems.

While residue can bunch up and create nitrogen sealing problems in the spring, Andrew says the weather cooperated…

Premium content is for our Digital-only and Premium subscribers. A Print-only subscription doesn't qualify. Please purchase/upgrade a subscription with the Digital product to get access to all No-Till Farmer content and archives online. Learn more about the different versions and what is included.
KEYWORDS Alfred Blackmer anhydrous ammonia fall-applied Iowa state university ISU Jim Andrew lack of moisture nitrogen research spring-applied nitrogen

Making ‘Never-Till’ Corn Yields That Are Fit For A King