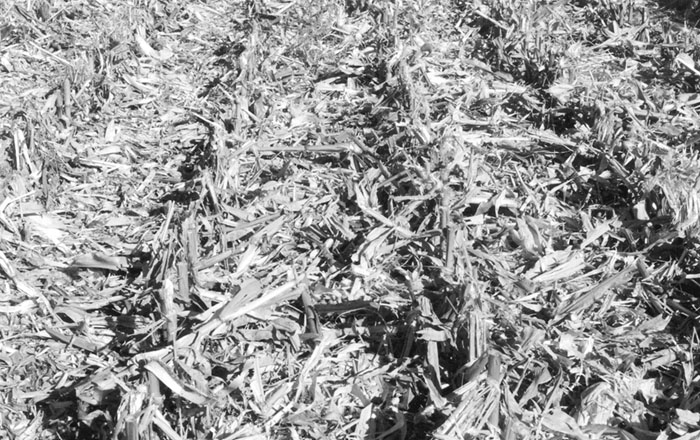 Start with level fields and do a good job of handling residue when harvesting your no-tilled crops.

Kevin Anderson figures there has had to have been a reason for tillage. “Basically, it is to size residue, incorporate fertilizer and level the fields,” he says.

Yet the the Andover, S.D., no-tiller suggests that the same things, plus creating a proper seed environment, can be done with no-till.

Corn residue sizing must be a priority during harvest because uneven sizing will result in poor seed-to-soil contact when no-tilling.

“Think of all the money that farmers have spent on equipment, labor, fuel and repairs to try and achieve what the harvest process should have done for them,” he says. “The harvesting machines that can do this are few and far between.”

To date, Anderson says that Cat and Claas are the only combine manufacturers that send lots of horsepower to the back of the combine for the chopper and to the front for the header. He says that if you size your no-till residue evenly, then you will also see the benefits of increased microbial activity and quicker returns on fertilizer investments. And there’s no more efficient time to size residue than at harvest.

The South Dakota no-tiller has been testing a Geringhoff roto-disc header from Europe on his combine with some success. He notes that another European manufacturer, Olimac, also makes a residue sizing header, which features a low gathering chain angle that contains the corn. “This header takes less horsepower than the Geringhoff and does a better job,” he notes.

Premium content is for our Digital-only and Premium subscribers. A Print-only subscription doesn't qualify. Please purchase/upgrade a subscription with the Digital product to get access to all No-Till Farmer content and archives online. Learn more about the different versions and what is included.
KEYWORDS Corn residue fertilizer fertillizer placement Geringhoff Kevin Anderson level fields Olimac roto-disc header