June 13, 2014 | Posted in Crop Protection
Source: By R.L. (Bob) Nielsen, Purdue University
The curious phenomenon often referred to as the "twisted whorl syndrome" is beginning to show up in some fields in recent days. This "problem" often occurs when young corn shifts quickly from weeks of slow development (cool, cloudy weather) to rapid development (warm, sunny weather). Earlier planted corn has certainly experienced such a change in weather conditions in recent weeks. The occurrence of the twisted whorl syndrome is not uncommon, but rarely affects a large number of fields in any given year or a large percentage of plants within a field.

The typical growth stage when growers notice the twisted whorls is late V5 to early V6 (five to six visible leaf collars, approximately knee-high). The lowermost leaves are typically normal in appearance, although some may exhibit some crinkled (accordion-like) tissue near the base of the leaf blade. Beginning with the sixth or seventh leaf, the whorl is tightly wrapped and often bent over at right angles to the ground.

Sometimes you can spot the early onset of this phenomenon one or two leaf stages prior to the dramatic appearance of the phenomenon. The early stages of twisted whorl are not dramatic to the casual observer, but will catch the eye of the seasoned crop scout.

I will freely admit that we do not fully understand why this symptom develops. For some reason, the leaves of the whorl of affected plants do not unfurl properly, as if the rolled leaf tissue has lost its elasticity or has become "sticky." Younger leaves developing deeper in the whorl are unable to emerge through the tightly wrapped upper leaves. The subsequently tightly twisted whorl then bends and kinks from the pressure exerted from the younger leaves' continued growth.

A natural instinct is to blame the twisted growth on herbicide injury. Indeed, where cell growth inhibitor or growth regulator herbicides are applied pre-plant or pre-emergence, shoot uptake of the herbicide by the emerging seedlings can cause twisted growth of the young plants. Late application of growth regulators can also cause twisted whorls in older plants when leaves and whorl intercept a substantial amount of the herbicide. Widespread occurrence of the twisted whorl syndrome is not, however, always accompanied by the common thread of any particular herbicide application.

Some have questioned whether wind damage can give rise to this phenomenon by somehow damaging the young inner whorl leaves. I have not often tracked the occurrence of strong winds with the development of the twisted whorl symptom, but it’s no secret that there were a number of strong storm and wind events throughout the state over the past couple of weeks. In the past few days, strong winds have been accompanied by unusually warm temperatures. 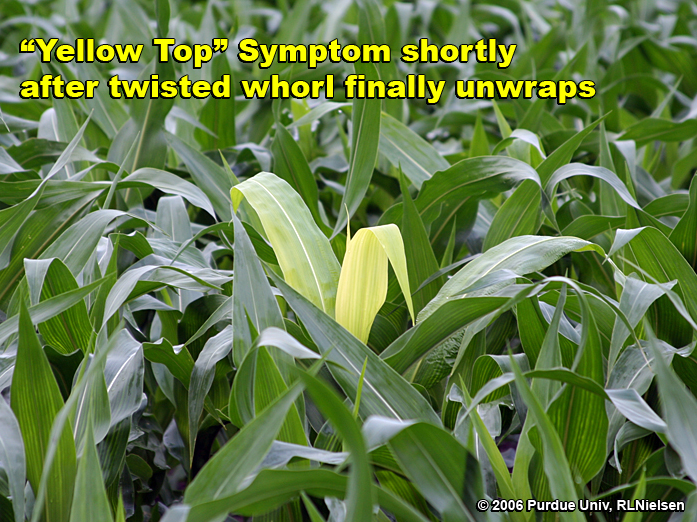 Whatever the cause, the appearance of the twisted whorl plants is unsettling and one could easily imagine that the twisted whorls might never unfurl properly. Given another week, though, twisted whorls of most of the plants will unfurl and affected plants subsequently develop normally. It is not uncommon to see hybrids vary in the frequency of twisted whorls.

If you didn't notice the twisted whorls to begin with, you may notice the appearance of “yellow tops” across the field after the whorls unfurl. The younger leaves that had been trapped inside the twisted upper leaves emerge fairly yellow due to the fact that they had been shaded for quite some time. In addition to being fairly yellow, the leaves will exhibit a crinkly surface caused by their restricted expansion inside the twisted whorl. Another day or two will green these up and the problem will no longer be visible.

The Good News: Yield effects from periods of twisted growth caused by weather-related causes are minimal, if any. By the time the affected plants reach waist to chest-high, the only evidence that remains of the previous twisted whorls is the crinkled appearance of the most-affected leaves.

Those Wrapped and Twisted Whorls in Corn

How to Prevent Fallow Syndrome in Corn

Ultra-Narrow-Row Corn: Squeezing The Most Out Of Your Crop