(Note: The following is an excerpt from Glyphosate Stewardship: Optimizing and Preserving Glyphosate Performance, a new K-State Research and Extension publication, MF-2767. This publication is available online at: http://www.ksre.ksu.edu/bookstore/pubs/MF2767.pdf/)

Weed control and the speed of control with glyphosate generally increase as air temperatures increase, as long as the plant is still actively growing. However, high temperatures that place plants under stress, or when combined with dry conditions, likely will result in reduced control. Glyphosate applied during cool periods before, during, or after treatment will result in a slower plant response and may result in decreased control.

High nighttime and early morning humidity may result in heavy dew, which may have an adverse effect on control. These conditions may reduce glyphosate activity by increasing spray droplet runoff and/or decreasing the concentration of glyphosate in the spray solution on the leaf surface.

Changes in light with the time of day also seem to influence control. Even though environmental conditions may seem more favorable in the morning or evening, research at several universities has demonstrated that weed control with glyphosate is often lower early in the morning or in the evening as compared to midday applications (Figures 1 and 2). This response is species dependent. Weeds such as volunteer wheat tend not to be adversely affected by applications in late evening or early morning. 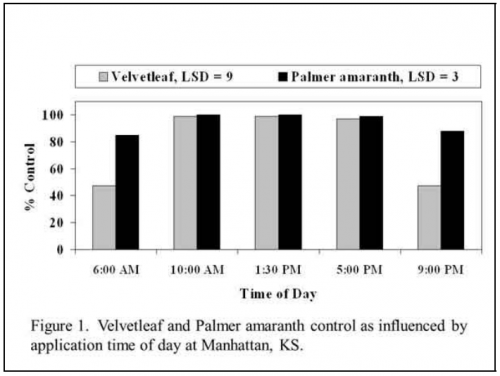 This phenomenon is not completely understood, but several possible contributing factors include interactions with dew, diurnal leaf movement patterns, and interactions with plant physiological processes. Some plants, such as velvetleaf and morningglory, fold their leaves down at night. Consequently, if the leaves are more vertical when the herbicide is applied, there is less spray coverage and herbicide uptake by the plant resulting in less control.

Light seems to be the key factor in the effect of time of day on glyphosate activity. Applications after sunrise and before the sun starts to set have generally provided the best control. Wind also is an important consideration: spray to avoid herbicide drift.