Switch From Corn To Soybeans? Not So Fast!

With a wet spring and delayed planting, many farmers are thinking of switching from corn to soybean due to potential yield losses in corn as planting is delayed.

However, if farmers consider potential net revenue, they may not make this switch as fast as if they consider just the potential yield loss.

Simple supply and demand considerations drive this analysis. Much of the U.S. Corn Belt is suffering from poor planting conditions this year, so total corn production likely will decline.

Markets will react and have reacted by pushing corn prices up. And if more farmers switch to soybeans, total soybean production may increase and markets will push soybean prices down.

So, since both yield and price are affected, revenue needs to be considered as well as yield. 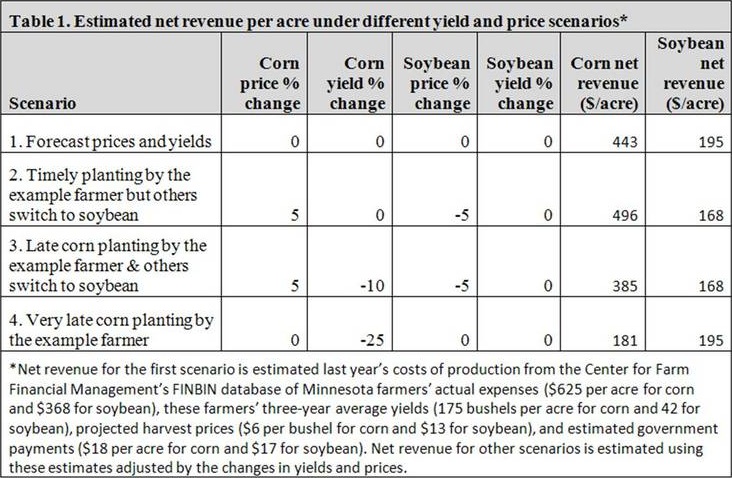 Using last year's costs of production from the Center for Farm Financial Management's FINBIN database of Minnesota farmers' actual expenses, these farmers' three-year average yields, projected harvest prices, and estimated government payments, forecast net revenue is estimated to be $443 per acre for corn and $195 for soybean (See Table 1 Above).

These estimates indicate a tremendous advantage for corn over soybean and the need for a large decrease in corn yield before soybean is more profitable than corn.

A simple sensitivity analysis shows this to be true. Suppose a farmer was able to plant corn and soybean in a timely manner and did not suffer a yield loss but many farmers across the Corn Belt switched to soybean and markets pushed the corn price up by 5% and the soybean price down by 5%. The estimates show an increase in net revenue for corn for this example farmer and a decrease for soybean (scenario 2 in Table 1).

In another situation, a farmer had corn planting delayed and suffered a 10% yield loss for corn but no yield loss for soybean. Again suppose many farmers switched to soybean so prices increased 5% for corn and decreased by 5% for soybean (scenario 3 in Table 1). In this situation, corn still has a higher net revenue than soybean for the example farmer. Switching for this farmer would lower total revenue.

Other scenarios show similar results: corn continues to have a higher net revenue.

And if many farmers were to suffer a corn yield loss, the market would certainly push the corn price higher than current levels.

This situation with no price changes is unlikely to happen this year since planting is being delayed across most of the Corn Belt and prices of both corn and soybean are being affected.

In a recent issue of Minnesota Crop News, Jeff Coulter and Seth Naeve report the research that show yields declining as planting date is delayed. However, in a year such as 2011 with lower growing degree days, they estimate the potential corn yield loss may be lower than in a normal year, perhaps 15% if planting is delayed to late May. Thus, potential corn yield losses may be less than the 25% loss in scenario 4.

Thus, farmers may be well served to keep their cropping plan unchanged even though yields may be lower. These estimates should hold if farmers are able to switch to shorter maturity corn hybrids.

However, if farmers stick with their full season corn hybrids, there is a good chance that these full-season hybrids will freeze early in the fall (when the grain is near 40% moisture) and that test weight will be low (as in 2009).  That creates all kinds of problems with harvest, drying, marketing, and dockage.

Farmers, lenders and others can make their own estimates of net revenue to analyze their own situations under different price and yield conditions.

A management tool that may help are the enterprise budget worksheets developed by our colleague, William (Bill) Lazarus, available at http://faculty.apec.umn.edu/wlazarus/documents/Cropbud_lateplant.xls

5 Questions to Consider Before Switching from Corn to Soybeans

Harvest Aids In A Not-So-Cooperative Year