Sulfur (S) deficiency in Indiana crops is more common today than years ago because, in part, S deposition from coal-fired power plants has been reduced. Large plot strip trials were conducted at several locations from 2017-2022 to examine corn yield response to S applied as ammonium thiosulfate (ATS) in starter and/or sidedressed nitrogen (N) fertilizers. Grain yield was increased by sidedress S in 26 of 55 trials. In the responsive trials, the average yield benefit to S fertilization ranged from 3 to 34 bu/acre, averaging 11 bu/acre. Sulfur in starter fertilizer as the only source of applied S and at rates of 5 lb S/acre or less, was only beneficial in 1 of 9 trials. Higher starter fertilizer rates of S may be effective, but further research is needed to evaluate this approach. Applying S in starter and sidedress was no better than applying S only in sidedress. A limited number of trials indicated sufficient S carryover from S applied to the previous soybean crop can satisfy S needs in the subsequent corn crop, but further research is needed to determine the consistency and magnitude of S from previous year applications. A summary of our sulfur research can be viewed on YouTube. 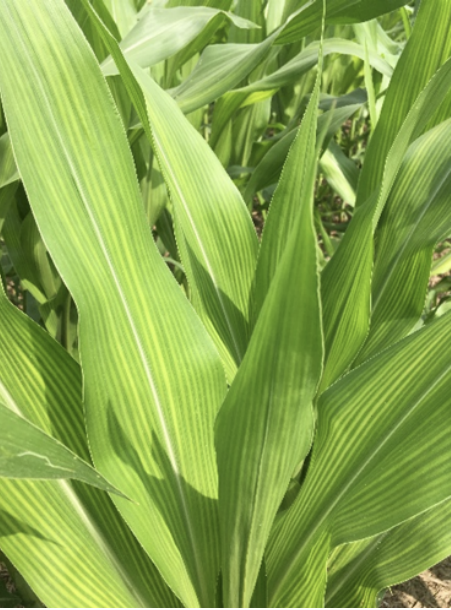 Sulfur deficient corn plants exhibit a general yellow-green color from top to bottom of the plant, often also with visible leaf striping (Fig. 1). Other nutrient deficiencies can cause striping and can sometimes be confused with S Figure 1. Sulfur deficiency symptoms in corn. Purdue Univ. 2 deficiency (Camberato, 2013). Nitrogen deficiency on the other hand, will usually have green leaves emerging from the whorl while the lower leaves turn yellow from the tip through the mid-rib, then turn brown, and quickly wither away. Tissue S levels less than 0.15 - 0.18% and tissue sample N:S ratios greater than 15:1 - 20:1 are considered reasonably good indicators of S deficiency in corn.

We conducted 9 field-scale trials exploring the impact of starter and/or sidedress S on corn yield in 2017 and 2018. To provide S we mixed ammonium thiosulfate (ATS) with urea ammonium nitrate (UAN-32% or 28%) or a mixture of UAN and ammonium polyphosphate (10- 34-0) as a starter fertilizer in 2x2 placement and/or as ATS with UAN as a sidedress application. Rates of S ranged from 3-5 lb S/acre as starter and 12-25 lb S/acre as sidedress. Sidedress fertilizer was injected in the row middle to a depth of 2-4 inches at corn growth stages between V5 and V7.

Starter fertilizer alone, compared to no S, had no effect on yield in 8 of 9 trials. Interestingly, three of those trials were actually S deficient and responded to higher rates of S at sidedress with yield increases from 15 to 20 bu/acre. Sidedress alone at 15-25 lbs S was as good or better than splitting S between starter (5 lbs S) and sidedress (remainder of S). In the one trial in which starter S increased yield, compared to no S applied, sidedressing an additional 10 or 20 lb S/acre did not increase yield any more than starter alone.

In 2022 we compared 9 lb S/acre applied as 2x2 starter to the same rate at sidedress in a single on-farm trial in SE Indiana. Yield responses to S were similar. Both S application timings increased yield about 6 bu/acre over the no fertilizer S treatment.

To determine the effect of sidedress S on corn grain yield, 55 field-scale trials (including the 10 with starter S treatments) were conducted at a number of sites from 2017-2022 (Fig. 2). Multiple rates of sidedress S were utilized in 23 of the 55 trials, ranging from 5 to 30 lb S/acre and always including a 0 lb S/acre treatment. Thirty-two trials only had 2 S rates, usually 0 and 15 lb S/acre (mostly in 2021 and 2022). Sidedress S was applied as described in the previous section.

Sidedress S increased yield in 26 of 55 trials (Fig. 2), ranging from 3 to 34 bu/acre averaged over the entire experimental area. In 23 trials where corn responded to multiple rates of sidedress S, the lowest Figure 2. Effect of sidedress S on corn grain yield, 55 field trials, 2017-2022 3 sidedress rate examined (ranging from 5 to 30 lb S/acre) was enough to maximize the yield response.

Even at sites that had large yield increases with S fertilization in most years, no response occurred in other years (LaPorte and Knox counties for example). Several sites were mostly unresponsive to S fertilization over several years of testing – Purdue research farms in Whitley and Jay counties for example. Season to season and field to field differences in corn response to S fertilization may be explained by seasonal differences in S mineralization from soil organic matter and crop residues, and carryover of incidental application of S in phosphorus fertilizers and from S applied to the previous crop (Camberato et al., 2022). 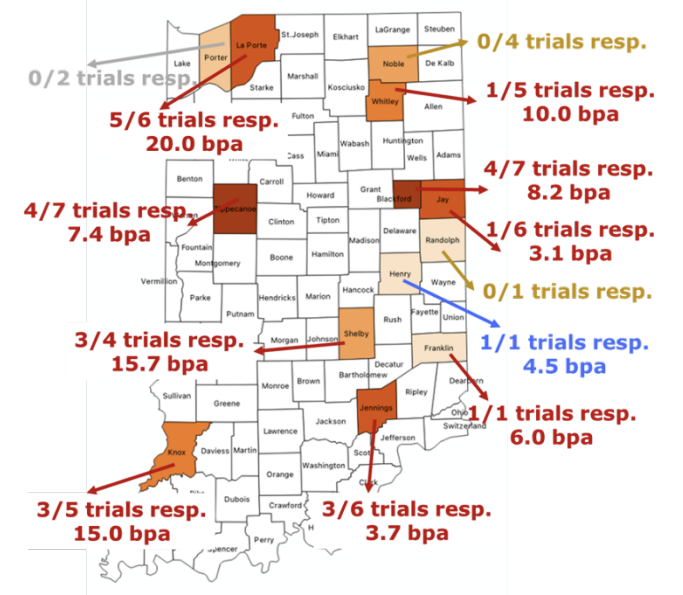 Carryover of S from the previous crop in some soils

To determine if carryover of S applied to the previous soybean crop could provide S to the next corn crop, we applied S in 2021 to soybeans at 0 and 20 lb S/acre in 60- or 80-ft wide replicated strips. In the following 2022 corn crop, each half of the 2021 treatments received either 0 or 15 lb S/acre at sidedressing. Corn yield increased in response to previous year S and sidedress S at 3 of 4 sites with silt loam/silty clay loam soils (Table 1). In 2 of the 3 responsive fields (Blackford and Jennings counties) apparent carryover of S from the previous year’s application was sufficient to maximize yield. At the Whitley County site, further yield increases occurred in response to the current year sidedress S application. Further research is warranted to more clearly document the potential for carryover S on a succeeding crop.

No soil properties (including extractable sulfate-S, organic matter, and texture) or presidedress plant tissue %S or N:S ratio consistently predicted responsive versus non-responsive sites, although some sites affirmed previous research which suggested S deficiency would be more likely and more severe on sandy low organic matter (OM) soils. For example, the LaPorte site is composed of loamy sand and sandy loam soils and averaged 2% OM. At this site S fertilization increased corn yield in 5 of 6 years, averaging 20.0 bu/acre. Similarly, in another site with substantial soil variability, S increased yield 10 bu/acre on a Whitaker silt loam (2.1% OM), while there was no response to applied S on a Bono silty clay (3.9% OM). However, the opposite occurred in a trial in Shelby County where the yield response to S was 35 bu/acre on 4 soil mapped as Brookston silty clay loam (2.6% OM), while there was no response to S on soil mapped to the lighter-textured lower OM Crosby silt loam (1.9% OM). Other sites with clayey soils and high % OM have also had substantial responses to applied S (for example, a Chalmers silty clay loam soil with 3.9% OM in Tippecanoe County). Research continues to identify soil, plant, and environmental measurements that improve our ability to predict corn yield response to S fertilization.

Although tissue sampling prior to sidedress did not identify sites requiring S fertilization, measuring earleaf tissue %S or the tissue N:S ratio in the earleaf at silking was useful in confirming S deficiency. Current guidelines for adequate S in the earleaf at silking suggest greater than 0.15% S is sufficient. Our research suggests the critical level for sufficiency may be greater than 0.18% (Fig. 3). The N:S ratio of plant tissue concentrations is also often used to assess S deficiency in corn. Sulfur and N are primary components of plant protein and typically occur in a ratio of about 15 parts N to 1 part S (15:1 N:S). Greater N:S values suggest S is deficient. Our results are consistent with this assessment, with most of the responsive locations having a N:S ratio of 16:1 or greater (Fig. 4). 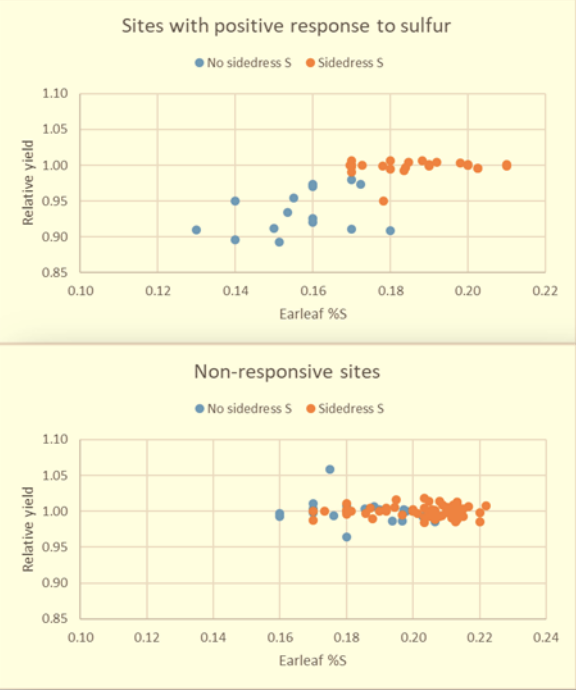 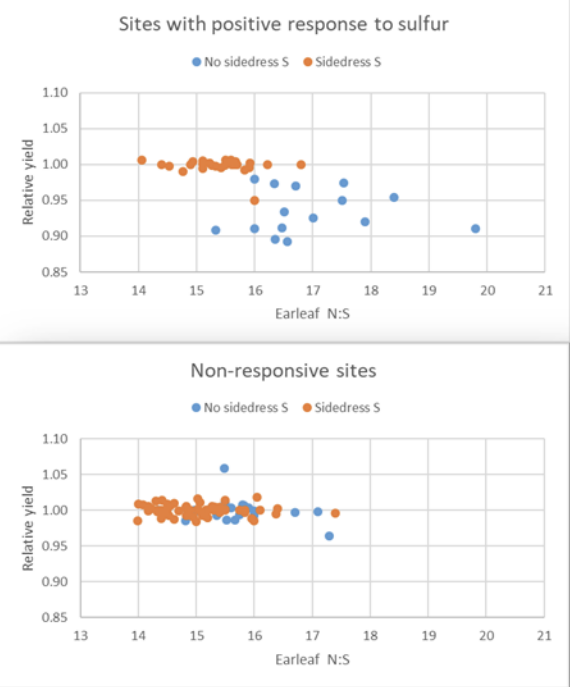 Not every field of corn is deficient for sulfur and so we do not recommend that everyone routinely apply S fertilizer to every single field they farm. Unfortunately, based on the results of on-going research, there is yet no consistent soil or plant predictor that accurately tells us where and when S fertilization of corn will be needed.

Sulfate-S analysis from fall soil samples is not helpful and we have found that even soil samples taken between planting and sidedress time are not helpful in determining whether a field needs S fertilization. The reason for this is that soil sulfate-S is subject to leaching from excessive rainfall, like soil nitrate-N, and soil-test S does not adequately reflect the organic-S that may come available during the growing season.

Our research also suggests that tissue analyses of plant samples taken just before sidedressing are also not reliably predictive of S needs by the corn plant – WITH THIS CAVEAT – If plants are (1) showing S deficiency symptoms prior to sidedressing and (2) plant tissue analyses show that %S is very low (approaching 0.12%) and (3) the N:S ratio of the plant tissue concentrations is very large (>24:1), then S fertilization is likely needed. We typically don’t see these levels of %S and N:S at sidedress time in our research trials, but we encounter them occasionally when troubleshooting problem fields. Although it is possible the crop will grow out of such early season deficiency as soils warm, organic matter mineralization increases, and roots explore more soil, it is more likely that an application of 10-15 lb S/acre will be needed to provide non-limiting conditions. Furthermore, since our research indicates that sidedress alone is just as good or better at relieving S deficiency than starter plus sidedress, delaying the decision to apply S based on symptoms and tissue analysis between planting and sidedress is a reasonable strategy.

Neither earleaf tissue %S or tissue N:S ratios are perfect at separating responsive and nonresponsive sites, so if tissue levels are near or below these critical levels, or if S deficiency symptoms were noticed, you should consider conducting simple S response trials on your farm next year. A simple protocol for conducting these trials can be downloaded here. We would be eager and willing to partner with you in conducting these trials.

Low rates of S as starter alone (<5 lb S/acre) have not increased corn yields in our trials. Higher starter rates might be beneficial but, unfortunately, we have only conducted 1 trial to address that question. We caution against applying more than 10-15 lbs of S in the form of ATS in 2x2 or closer starter placements without on-farm testing of your own because ATS can result in seed or plant toxicity.

The risk of soil sulfate-S loss increases the earlier that S fertilizer applications are made prior to planting, particularly on sandy soils. Counting on plant available S from elemental S is risky since availability is reliant on warm soil temperatures. Plant availability of S applied as elemental S in fall and winter is no different than a spring application because conversion to sulfate will not occur till soils warm substantially. Even fertilizers claiming accelerated elemental S conversion to sulfate because of very small particle sizes include a sulfate component to provide plant available S soon after application. Additional discussion of different S fertilizer sources can be found in Camberato et al. (2022).

What is the minimum effective rate of S to apply?

Our research suggests that 10-15 lbs S/acre, applied just before planting but no later than sidedressing, will be adequate in most S-deficient situations. Broadcast applications of sulfate-S at/or shortly after early season plant sampling should be similarly effective as knife/coulter sidedress S applications.