Forage sorghum, sorghum-sudangrass, and sudangrass are important forage crops throughout the United States. While sorghum is a valuable forage crop, sorghum species can produce prussic acid, which can be toxic to livestock. Prussic acid, also known as hydrogen cyanide (HCN), can cause acute toxicity and death. Potential of HCN toxicity (HCN potential) is directly related to dhurrin content, which is the precursor to HCN. Dhurrin is broken down through cell disruption, such as chewing or freezing, which causes rapid HCN release.

Plant Age. Sorghum age has a significant effect on dhurrin content. Plants have larger amounts of dhurrin in the early growth stages or early regrowth. Older plants, however, can increase HCN potential as a result of environmental factors, as described below. Delay grazing until the plants have reached a height of 18 to 24 inches to avoid HCN toxicity under good growing conditions.

Tissue Type. The vegetative portion of all sorghums can contain dhurrin. HCN potential varies within a single sorghum plant depending on the plant tissue. Tillers, commonly called shoots, can contain a large amount of dhurrin, too. Examine fields for the presence of young tillers on more mature sorghum plants.

Drought. In the western and southern United States, ingestion of sorghum species during drought can cause cyanide toxicity in livestock (Figure 3).. Nitrate levels also can be high in drought-stressed plants.


Frost. Sorghum can become stressed in frost conditions leading to an increase in dhurrin. It is important to remove livestock from sorghum when a frost is predicted. After a frost, keep livestock off frosted sorghum plants for at least one week. This recommendation is a rolling suggestion, meaning that every time another frost occurs, livestock should be removed from the frosted plants for another week, until the plants have been completely killed with a hard frost. After a non-killing frost, sorghum should be scouted for regrowth because it can contain a large amount of HCN. If regrowth is apparent, you should wait 10 to 14 days or until the regrowth has reached 24 inches tall before grazing or chopping.

Nitrogen Application. Overfertilization with nitrogen can cause the crop to be toxic by two different mechanisms, HCN potential and nitrate concentration.

Pasture. Grazing sorghum is considered to be the most dangerous option when HCN potential is a concern; however, proper management can reduce risk. Figure 6 shows a calf grazing sorghum-sudangrass that is more than 18 inches tall and shows no stress from frost or extreme drought, both conditions that could increase HCN potential. Residues from grain sorghum can be safely grazed after grain harvest, if the remaining plant is totally dead after a frost, or a week has passed since the frost occurred. Grain sorghum can have small tillers that can be high in HCN until after a killing frost. 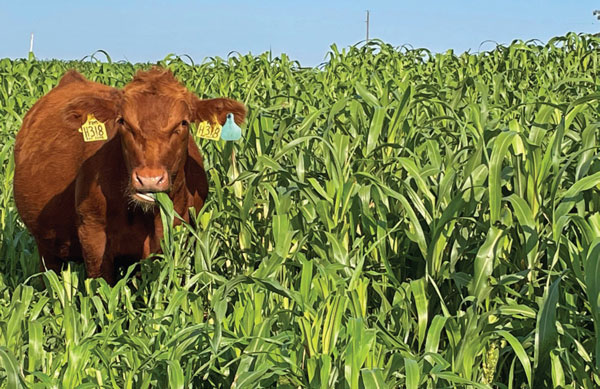 
Hay. It is recommended to use forage sorghum as hay when HCN potential is not a concern; plants are greater than 18 to 24 inches tall, and not drought or cold stressed. Drying does not eliminate risk. If in doubt about the degree of stress that might lead to elevated dhurrin in hay, collect a representative sample and test for HCN potential.

Silage. Silage is considered one of the safest options when feeding sorghum forage.

Green Chop. Use of green chop reduces HCN potential as compared to grazing but is not considered as safe as feeding silage.

If HCN is a concern, several steps can be taken to reduce the potential of cyanide toxicity. These steps include:

If you suspect HCN poisoning in even one animal, call your local veterinarian immediately and remove the rest of the livestock from the feed. Accurate diagnosis of clinical signs and removal from feed is important in these cases. Your veterinarian may collect samples of forage, rumen contents, or blood to help confirm a diagnosis.

Overall, sorghum has many beneficial properties. If proper management occurs, sorghum can be a safe and beneficial forage crop. Soon, a new hybrid will be on the market that is dhurrin-free. This hybrid will not release HCN because there is no accumulation of dhurrin. This new hybrid will be a great option for removing the fear of cyanide toxicity.