By Michaela Paukner posted on July 15, 2022 | Posted in Strip-Till Farming

The 2022 Strip-Till Innovator Award program is sponsored by

For Brian Ryberg, seeing an obvious visual of how undisturbed soil produces better crops sparked a commitment to finding novel ways to farm.

Ryberg, who farms about an hour and half west of Minneapolis in Buffalo Lake, Minn., was the first farmer to strip-till sugar beets in Minnesota, the nation’s largest sugar beet producer. His award-winning strip-till, cover crop and soil health practices — in addition to his commitment to educating other farmers about strip-till — make Ryberg a deserving winner of the 2022 Strip-Till Innovator Award.

Ryberg says they strip-till 80-90% of their total acres. The remaining acres are vertical-tilled ahead of soybeans. The conservation tillage methods are a far cry from the heavy tillage practices of most of his neighbors, but Ryberg believes he’s gained a lot of respect over the years for what he’s doing.

“I’ve had landowners who have recognized what we’re doing, and we’ve been able to expand because of that,” Ryberg says. “They want people to practice things like we’re doing. It’s been a big advantage for us.”

Strip-till is also saving Ryberg money on inputs and fuel. He estimates that he cut his phosphorus (P) and potassium (K) rates by 25% because the operation is more efficient with application and more diligent with applying what’s needed where it’s needed. Pulling his SoilWarrior strip-till rig burns 0.6-0.8 gallons of fuel per acre, compared to the up to 4 gallons of fuel per acre he was using just for fall tillage in a conventional tillage system.

Like most of his neighbors, Ryberg was doing heavy tillage in the fall and spring prior to switching to strip-till. But in 2013, he discovered the corn growing in a section of a field that was recently pasture land was greener and taller than the corn on the long-term conventionally tilled ground.

With Minnesota’s cold springs, Ryberg didn’t feel comfortable going to a no-till system, so he decided to try strip-till as a “happy medium” of preserving soil structure and warming up the soil prior to planting. Ryberg and his farm crew demoed a strip-till bar in fall 2013, and one year later, they started strip-tilling all of their acres.

Ryberg Farms is now on a 5-year rotation of corn, soybeans and sugar beets. The rotation requires careful management because sugar beets are sensitive to certain chemicals and grow best on pattern-tiled ground.

“We’re very cautious about the chemistry we use, and we use that on all of our acres so we stay consistent,” Ryberg says. “We try to prepare 2 years ahead of when we’re going to grow beets to give the crop the best chance to succeed.”

Ryberg’s nephew, Chris, makes most of the strips for all crops in the fall using a triple coulter Environmental Tillage Systems (ETS) SoilWarrior strip-till rig. He tills an 8-10 inch strip, depending on the soil type, and runs the coulters about 4-6 inches deep. He also applies P, K and some micronutrients in the fall. Anywhere from 100-450 pounds of product is applied to 2.5-acre grids at a variable rate.

“We’re trying to farm by the foot,” Ryberg says. “It’s always driven by the soil test. We work with an agronomist to put those variable-rate maps together, and then Chris plugs them into the system. We’re trying to get more balanced fertility out there.”

“If we truly want to see these practices spread, it’s up to us to share the message…”

Nitrogen (N) is applied in the spring with the planter and a sidedress pass, partially because Ryberg was in a NCRS Conservation Stewardship Program that required spring N application. He also believes in spoon-feeding N to avoid losing it through leaching. He sidedresses N using Y-Drops, rather than putting it in the middle of the row, to keep the N as close to the plants’ roots as possible.

“Our focus with the strip is to keep all our fertility as close to the root zone as possible,” Ryberg says. “We’re even banding right over the row with some fungicides on sugar beets. We’re trying to target where the roots are and trying to be the most efficient we can with the fertility and any treatments.”

They run about 200 pounds of N on corn-on-corn. Almost all of it is in the form of 32%, but a small percentage is monoammonium phosphate (MAP) or diammonium phosphate (DAP) fertilizer applied in the fall for P and K needs. About a third is applied with the planter, a third is 32% N used as a carrier for a weed-and-feed application, and the last third is sidedressed at V6. Corn-on-soybeans and corn-on-sugar beet ground get about 160 pounds of N total. 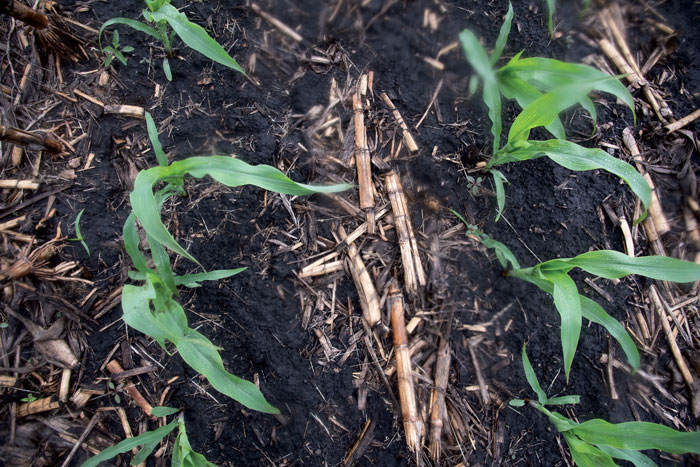 RAIN & RESIDUE. Residue between Ryberg’s strip-tilled corn helps keep soil from running off his fields during heavy rain. Ryberg uses Calmer stalk rolls and a vertical-till machine to size the residue after harvest.

Ryberg also has a co-op spread lime in the fall after harvest for fields going to sugar beets. On average, each acre receives about 3 tons of lime, but the rate varies from 1-5 tons based on the pH of those 2.5-acre grids.

“We cut our P and K rates by 25% because we’re being more efficient, but we’re also watching our grid testing to make sure we’re not burning up those nutrients and not replacing them,” Ryberg says. “That’s still a learning process. With high grain and fertilizer prices, you don’t want to give up the chance to produce a really good crop. You have to be very cautious about that.”

Around the same time he started strip-tilling, Ryberg decided to try seeding cereal rye as a winter cover crop to keep the soil on his sugar beet ground in place. Since then, it’s become his go-to cover crop.

Ryberg says cereal rye germinates around 37 degrees F, so it starts greening up any time snow melts and grows rapidly in the spring. He seeds 45-50 pounds on the sugar beet acres and is considering going up to 60 pounds on the corn acres because some of the seed seems to get tied up in the cornstalk residue. Ryberg likes planting soybeans green into the standing rye in the spring and uses Roundup to terminate it.

His focus is seeding cereal rye in the fall on sugar beet acres and corn ground going to soybeans. He received a grant in 2021 that allowed him to purchase an older TerraGator with a spreader box on it. He plans to use it to spread covers on several farms ahead of the vertical tillage machine. This year will be a mix of cereal rye and oats.

Ryberg says he’s built a network of strip-tillers through his involvement with the Sugarbeet Research & Education Board and other organizations. They share ideas and knowledge with each other to help everyone find success.

“There are too many people who will try something, and if it doesn’t work perfectly the first time, they just scrap it,” Ryberg says. “I don’t want that to happen to somebody because I really believe this is a good system.”

Learn more about 2022 Strip-Till Innovator Brian Ryberg and his operation in a series of exclusive videos.

Ryberg also hosted field days focused on strip-till in 2016-19. The Fertilizer Institute recognized him as a 2020 4R Advocate for his focus on nutrient stewardship, and he also received two awards from the Soil Health Partnership for his efforts to improve and protect his soil health. In 2021, the American Soybean Association named him as the National Conservation Legacy Award winner, noting how incorporating strip-till and cover crops make Ryberg’s operation more economical and environmentally responsible.

“If we truly want to see these practices spread, it’s up to us to share the message and help everybody along,” Ryberg says. “I’ve got local people who are doing their full-scale tillage, but they’re trying cover crops to keep the soil where it is. That’s a step in the right direction.”