The 2021 survey conducted by the North Dakota Department of Trust Lands shows rents had increased only 0.77% from 2020 to 2021 and land values were up 1.74% during the same time period. In fact, from 2015 though 2021, rents and values across North Dakota had mostly remained flat, or even declined to some degree, when inflation adjustments were made to the yearly reported rates, says Parman.

Statewide cropland rental rates were reluctant to increase at the same rate as values. With rates increasing 3.1%, we need only go back to the period from 2018 to 2019 to find a comparable increase where during that period, statewide average rates increased 3.61%, he adds. 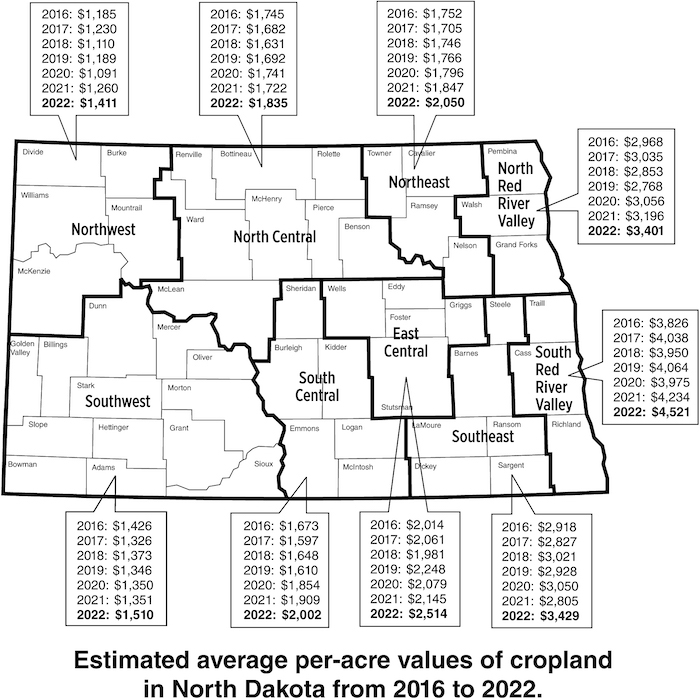 With significant decreases in rental rates in 2016 and 2018 and a slight decrease in 2020, the 3.1% increase from 2021 to 2022 essentially helps hold rates steady statewide over the last seven years. If accounting for inflation, rental rates in “real dollars” have declined somewhat compared to where they were in 2015.

With respect to land values, six NDSU Extension regions saw double-digit gains in land values. The highest regional increase for 2022 occurred in the southeast where land values increased 22.25%. The next highest was the east-central region, increasing 17.22%. The northwest, northeast and southwest regions all increased between 11% and 12%. The north-central, north Red River Valley and south Red River Valley all increased between 6% and 7% while the south-central NDSU region increased the least at nearly 5%.

Rental rate increases were much smaller with three NDSU regions near or below a 0% increase and no regions increasing more than 5%. The largest increase in cash rents occurred in the north-central, southwest and southeast regions, all increasing nearly 5%. The south-central and south Red River Valley regions both increased approximately 3.5% while the northeast increased 2.85%. However, the north Red River Valley increased only 0.6% while the east-central did not increase at all. The northwest actually decreased 1.1%, Parman says.

“While high commodity prices and perhaps inflation appear to have driven up the price of farmland, it also appears that high production costs and possibly the ability to secure new or used equipment has muted an increase in rental rates,” Parman says. “Indeed, low interest rates, and strong net farm incomes in 2020 and especially 2021 have encouraged farmers to pay more for farmland coming on the market.”

“Land buyers also have the equity and time component on their side and are willing to overlook high production costs for a year or so," Parman adds. "However, potential renters must focus on what is going on this year, and there appears to be a reluctance to pay significantly more in cash rents than was paid from 2020 to 2021. Additionally, 2022 will be following a drought over much of North Dakota, limiting the appetite for paying higher rents. However, the 2021 drought doesn’t appear to have been strong enough to negate the impact of high commodity prices and low interest rates impact on land values.”

Projected Profits of North Dakota Crops Vary by Region in 2019