No Surprises with 2021 Oklahoma Cotton Harvest

Jackson County farmers Keeff Felty and Clint Abernathy rated their cotton harvests as being about average compared to production levels in the past.

“Typically, we worry about weather conditions, but this year has been more about pandemic-related supply chain issues and rising prices of inputs such as fertilizer, diesel fuel and the like, essentially everything but seed,” said Felty, a fourth-generation cotton farmer who earned his bachelor’s and master’s degrees in agricultural economics from Oklahoma State University in 1989 and 1991, respectively.

Felty and his stepmother Natalie Wheeler have been agribusiness partners for 26 years. They have been stockpiling equipment parts and other supplies as they can. They’ve had to look as far away as Houston for some of them, he said.

Abernathy, another fourth-generation cotton producer who farms with his two sons and son-in-law, said 2021 was a tale of two management options for their operation.

“We grow both dryland and irrigated cotton, the latter of which relies on mostly furrow irrigation, though we’ve been moving gradually to more drip irrigation over the years,” he said. “There was a point this past summer when we simply didn’t have enough water to irrigate properly. The lake that is our water source was way below its normal level. But then the skies opened up in July and continued to rain off and on in August, so it worked out well enough to produce a decent crop.”

A relatively dry, mild and sunny September following the rainfall allowed the cotton to mature, exactly as Oklahoma producers needed. Some cotton fields began to have cracked bulbs by mid-September, earlier than most analysts expected.

“Analysts and producers recognized that high yields weren’t likely to happen given weather conditions at the start of the growing season,” said Seth Byrd, OSU Extension cotton specialist. “We’ve seen the crop fruit higher up on the plant than it normally does. The cotton looks good visually, but it took longer to fruit and that affects yields.”

“During harvest, weather conditions become the primary concern,” he said. “However, we’ve had some high-wind and storm events and Oklahoma cotton seems to have come through fairly well. It’s evident the crop has been rained on, but we haven’t seen indications of significant yield loss. Harvesting delays have been minimal.”

As of Nov. 8, about 50% of Oklahoma’s cotton crop has been harvested with nearly 100% of irrigated cotton harvested. The ratio is typical for Oklahoma, according to market statistics. Dryland cotton tends to be later-maturing plant varieties. Prices for 41-4-34 cotton — desired designations for color, leaf grade and staple, respectively — is $1.13 per pound, an increase from about 90 cents per pound in mid-September. The Oklahoma 10-year average price is 67 cents per pound. 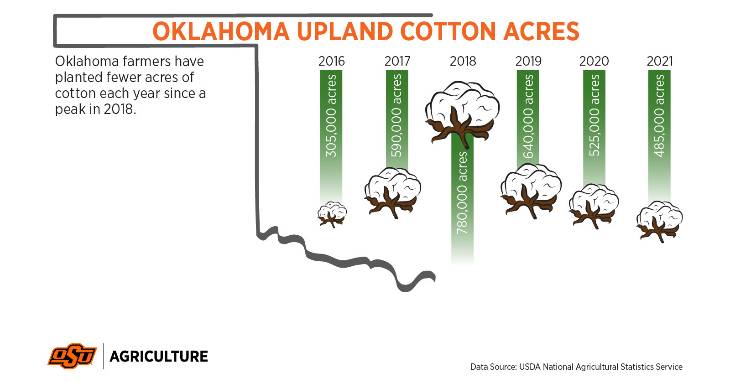 Cotton is Oklahoma’s fourth-largest export behind oil, gas and wheat, although total acres committed to growing cotton can vary widely from year to year — in 2018, for example, about 780,000 acres were reported, compared to 305,000 acres in 2016. Cotton is planted in May and harvested in October and November. It is one of the more expensive crops to produce, in part because improved disease-resistant varieties and equipment needed to care for and harvest the crop can be costly. A new cotton harvester costs about $1 million, as an example.

Mike Schulz, station superintendent for OSU’s Southwest Agronomy Research Station in Tipton, recently told Oklahoma Educational Television Authority (OETA) news reporters that $450 million to $500 million worth of cotton is projected to be harvested in Oklahoma in 2021.

Abernathy, who has been a full-time farmer since graduating from OSU in 1981 with a bachelor’s degree in agricultural economics, said some Oklahomans don’t realize the importance of cotton to the state, and especially to those counties in which cotton is a significant crop.

“Between production, the ginning process, storage and transportation, cotton can be a major employer,” he said. “Thankfully, cotton prices have been good this year.”