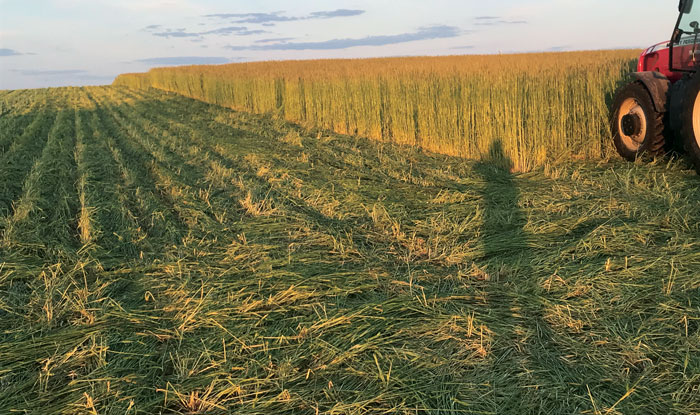 By Libby Wawzenek posted on November 7, 2021 | Posted in Cover Crops

Indiana no-tiller Carter Morgan considers research and long-term goals to determine which cover crop variety will best support the needs of his farm.

LIKE MANY FARMERS, Carter Morgan relies on crimping to terminate his cover crops. However, unlike some of his peers, Morgan has stopped purchasing variety not stated (VNS) cover crops and has instead embraced the specificity of using the exact variety of cereal rye that meets his needs.

Morgan, who farms 2,700 acres around Cayuga, Ind., and tries to get cover crops on as many acres as possible every year, says this not only allows him to more effectively manage the growth and maturation of his cover crops, but it also means he is saving money on cover crop seeds — a benefit of using variety stated cover crops that caught him by surprise.

“I remember guys [at the no-till conference] telling me I need to plant Elbon cereal rye,” says Morgan. “I would price it, and it was always more expensive [than VNS]. Finally, one guy looked at me and said, ‘Carter, look at your seeds per pound, and you can get your price down.’”

Morgan realized he would actually get more seeds per pound of Elbon cereal rye compared to VNS cereal rye — making the Elbon more cost effective, even though on the surface it appeared to be pricier.

“Once we figured that out, we realized we didn’t have to break the bank to get our same seeds per acre out there,” he says.

Not only that, but by selecting varieties of cover crop that directly support his goals, Morgan can develop a more precise timeline for planting…