Pictured Above: ENHANCED AERIAL VIEW. A Climate FieldView yield map overlaid with the irrigation section control map shows that areas on the left didn’t yield as well as the areas on the right. While the Dees originally thought it was an irrigation issue, analysis later showed it was a malfunctioning fertilizer pump at the pivot as well as the seeding of different hybrids.

Precision irrigation and storage technology plays a big part in the economic sustainability of Dee River Ranch near Aliceville in western Alabama. There, the Dee family farms 4,000 acres of tough clay soils, including 3,000 acres in a no-till corn-soybean-winter wheat rotation under center-pivot irrigation.

“Because we get 50-60 inches of rainfall annually on our farm, many question our investment in irrigation, but it’s helped us boost our yields, even in wetter years, and shows us very positive returns on investment,” explains Annie Dee, who farms with her brother, Mike, and her sons Seth and Jesse about 25 miles west of Tuscaloosa.

“Western Alabama has generous annual rainfall averages, but most of it comes from November to February, many times leaving the growing season hot and very dry.”

The family moved from Florida to Alabama in 1989 and switched to no-till in the middle 1990s as a way to improve the heavy clay they encountered.

“We were accustomed to light, sugar-sand soils, but the clay we found here invariably seemed either too wet or too dry to farm conventionally,” she explains. “No-till helped, but it didn’t solve the drought problems we get during the growing season. Year after year we would get a good stand of corn, fertilize it well, get it all the way to tassel and then the rains would end during the critical stage of corn development for yield.”

In 2011 the Dees built a retention pond and installed a pair of center-pivot sprinklers as a trial to provide adequate water to fill the kernels of the corn crop.

“That year was a widespread drought, and corn was $7-7.80 per bushel,” Dee recalls. “Where we irrigated we got 136 bushels per acre. It wasn’t a bumper crop but it was very good considering just outside the sprinkler circle we harvested just 18-bushel corn. The pivots paid for 75% of their cost that first season!”

Buoyed by the success of the 2011 irrigation experience, the family quickly added 15 additional Zimmatic pivots to their system and plumbed them to a battery of five 150-horsepower, computer-controlled, variable-frequency drive Watertronic pumps. The pumps supply water through 18- to 20-inch pipes to field manifolds which feed individual sprinkler systems.

“To feed the system, we built a 110-acre reservoir — which is 50 feet deep in one place — to collect rainwater during our rainy season, and then we redistribute it through the sprinklers during the growing season,” Dee explains. “It’s a very sustainable approach because if we didn’t collect the water, it would just flow down the creek and end up in the Gulf of Mexico. We’re not depleting any aquifers, we’re just collecting runoff.”

Dee says she worried about utility bills at first as the family purchased the five three-phase pumps instead of one large pump.

“With this system, however, the smaller pumps kick on as needed based on water pressure and flow requirements,” she explains. “If we are running a couple of pivots, maybe we need only one pump which starts and responds to the desired power necessary. If we turn on more pivots, the computer will ramp up the first pump to its maximum and slow-start another pump and bring it up to the necessary power, and so on.

“The system uses far less electricity than one large pump. In fact, when we installed it we were told it was the most efficient irrigation system in the country.” 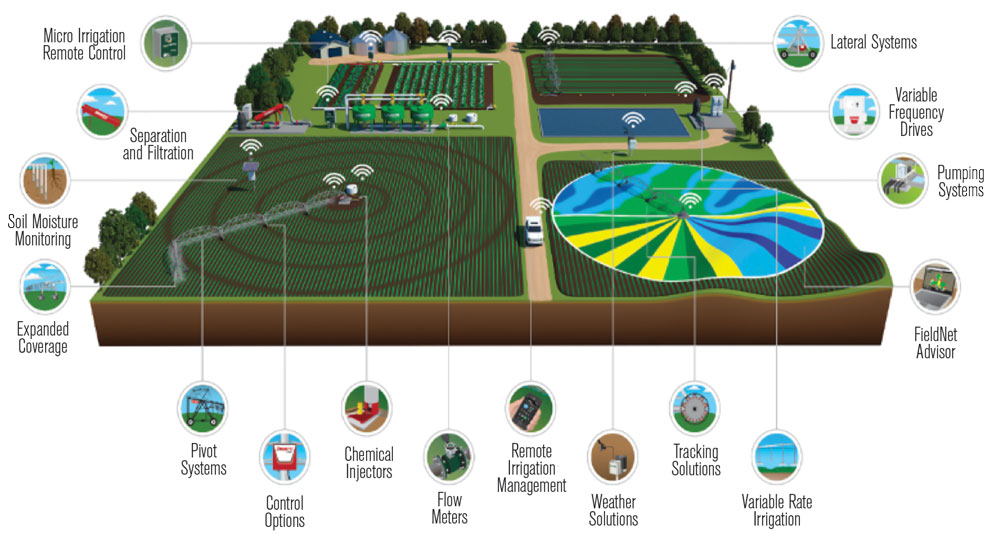 FARMING SMART. Annie Dee says the irrigation system at the Dee River Ranch includes probes that send information about soil moisture to help the Dees determine when to irrigate as well as chemigation injectors that allow them to apply fertilizer or micronutrients directly through the pivots. The system can be controlled remotely and generates additional revenue of $710 per acre.

The Dees’ system was sized to operate roughly half their pivots at a time, but actually can deliver 1 inch of water every 3 days to about 60% of their irrigated acres in a pinch.

“We typically run about half our system 3 days for 1 inch of water and then turn those pivots off and start the other half for a 3-day run,” Dee explains. “The theory is 3 days on the first half, 3 days on the second half and rest on Sunday. Reality, however, doesn’t always stick to that schedule.”

Dee says her family is very conscious of the expanding global demands for food and the limited supplies of fresh water available to produce that food.

“Our irrigation system is designed with those concerns in mind,” she explains. “Everything we do is geared to saving energy, time, water and soil, while at the same increasing yields and profits so we can remain economically sustainable.”

To boost irrigated production, many of the pivots on Dee River Ranch feature GPS-guided corner spans to water the corners found of each circle — significantly boosting irrigated production over “circle-only” sprinkler setups. In addition, the family spoon-feeds its irrigated corn crop with numerous fertilizer applications applied through the pivots based on yield goals and weekly tissue samples.

“Frequent smaller fertilizer applications reduce the risk of environmental runoff problems and ensure the crop is getting only what it needs when it needs it,” Dee explains.

The Dees can monitor each of their sprinklers through smart-phone technology and can start and stop the machines remotely through their cell-phone internet connections.

Also, precision water scheduling based on soil moisture monitors, in-field weather stations and algorithms found in Lindsay’s FieldNet-Advisor help the Dees continue to push their yields with the most efficient use of pumping costs and water.

“Advisor helps us know when to irrigate and when to turn off the sprinklers,” she explains. “The program senses when we last irrigated and how much rain we get. It shows how much water the plant has used and what water it’s used for cooling.

“Based on the variety of corn we’re using and the soil type, Advisor can calculate how much water we’ll need to apply and when,” she says. “These predictions can help growers maintain adequate water on their corn — without overwatering — to prevent the crop from entering periods of yield-robbing stress.” 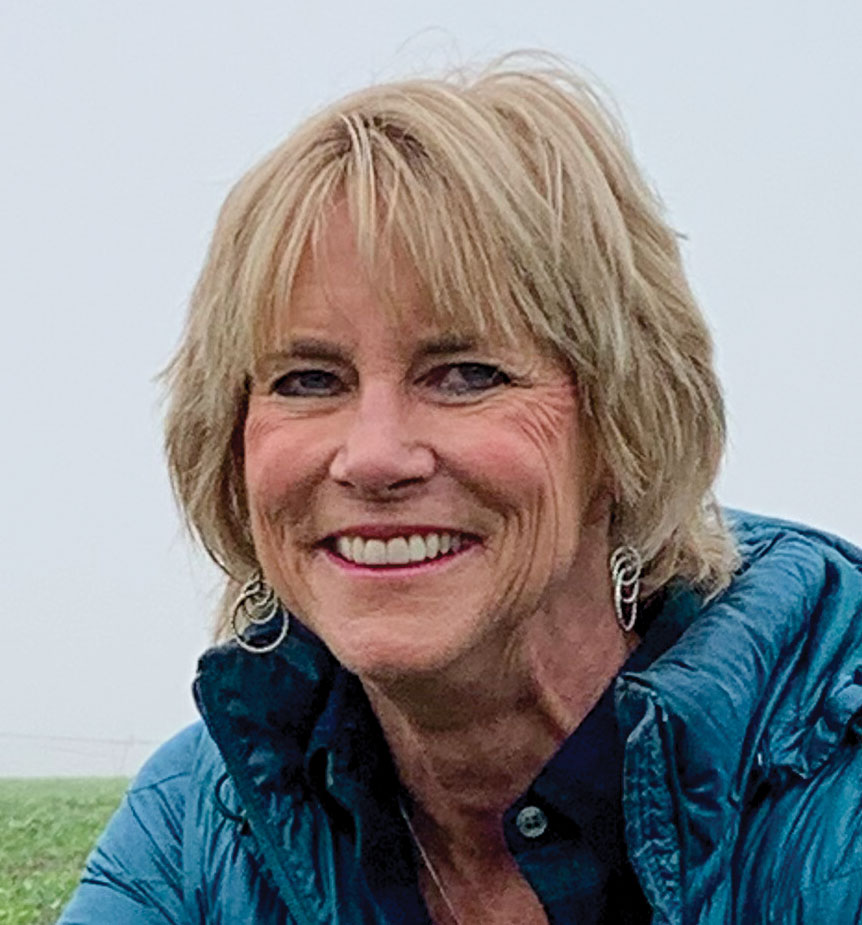 Dee says using maps of irrigation applications overlaid with yield maps and aerial and satellite images also serve as a forensic teaching tool with visual cues to problems that might occur during the growing season.

“In one field we realized a significant yield loss on one half of a circle,” Dee recalls. “I thought we didn’t get enough water on it, but the records showed the pivot applied the water as programmed. Ultimately, we traced the problem to a malfunctioning fertilizer pump at the pivot.”

Upon further investigation, with more advanced enhanced vegetative index (EVI) imagery, they realized that part of that half circle had been seeded with a different hybrid which outyielded the corn in the rest of the half circle.

“All this technology is exciting for us on our farm, because globally such tools are estimated by 2022 to have saved agriculture 734 billion gallons of water and 1.2 billion kilowatts of electrical energy,” she explains.

Estimates say only 18% of the Earth’s farmland is irrigated, but that 18% produces more than 40% of the planet’s total food supply making efficient use of water critical.

“Of the 1% of the Earth’s available freshwater supply, agriculture uses two-thirds of that figure so our family is very concerned with trying to remain economically sustainable while providing the increased food production needed to meet a 10 billion global population figure estimated by 2050,” she says.

Dee says her family’s heavy investment in irrigation has benefited yields as well as economics with positive ROIs in high market years and low. As an example, she cites one of the farm’s irrigated field’s 10-year amortization figures: 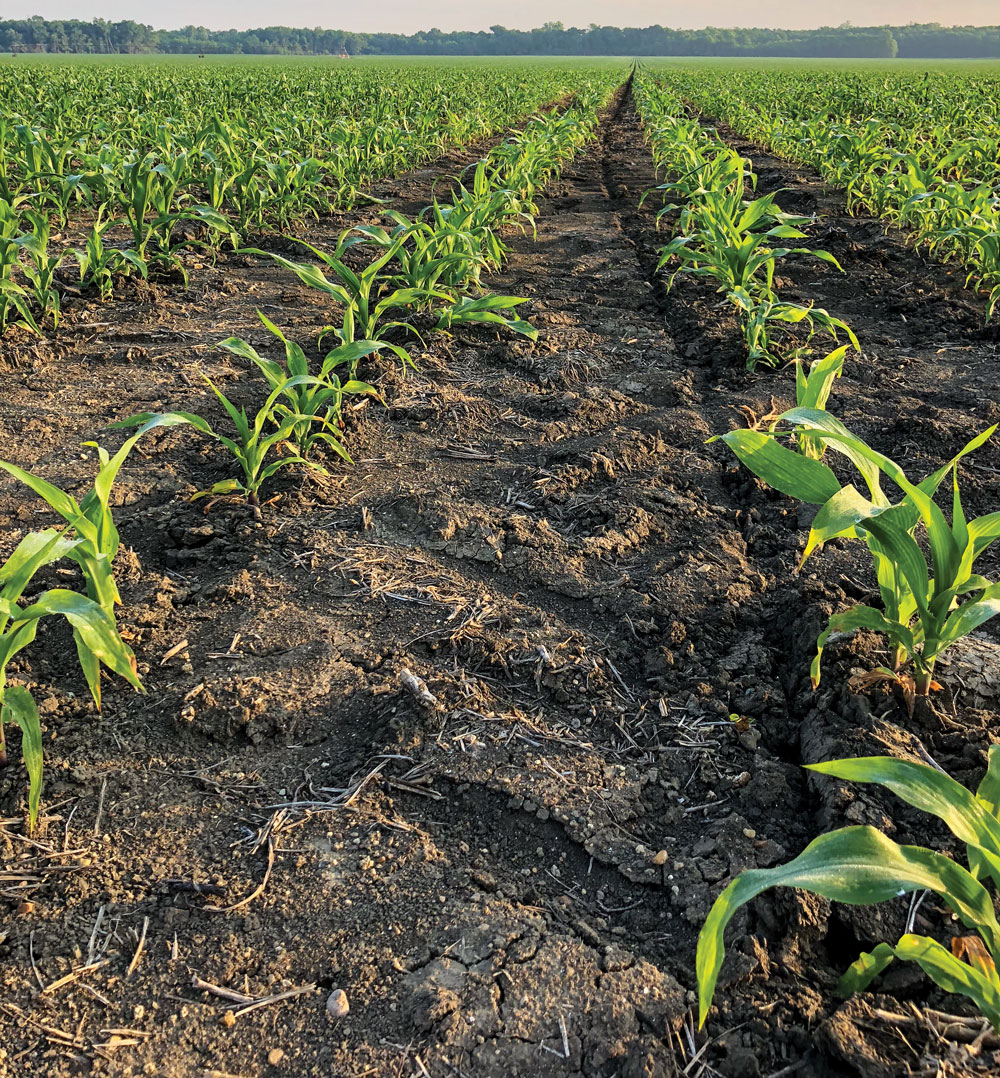 PRECISION IRRIGATION. Lindsay’s FieldNet Advisor program takes the variety of corn and the soil type in a given field into account when calculating precisely how much water the Dees need to apply and when.

With corn at $5.30 per bushel, and figuring $1,750 for electricity, Dee says they calculated that the irrigation system would begin to pay off in the third year.

Using 56-bushel dryland soybean yields and 76-bushel irrigated yields and a $13.80 per bushel soybean price, Dee says the payoff is quite similar to the corn comparison.

Using average yields on four different but similar silty-loam fields from 2018 through 2020, Dee says the average dollar-yield per-acre increase in the corn and soybean rotation was $710 for using irrigation technology.

“In the big bin we have temperature, moisture and CO2 sensors,” Dee explains. “While we have typically monitored grain temperature and moisture levels, the newly-added CO2 monitors increase our ability to detect insect activity in the bin. Now we can monitor all three variables throughout the storage season and create virtual maps of what’s occurring within the bin.”

The sensors provide color-coded readouts on the Dees’ computers or smart phones and can be used to monitor grain levels and to control ventilation fans based on pre-set moisture and temperature levels. The colorful in-bin maps can also identify where in the bin temperature or CO2 anomalies exist to help pinpoint potential insect problems.

Dee says in some years the farm doesn’t sell all the September-harvested corn in its storage until the following April or May and the precise knowledge of stored grain conditions can be used to a marketing advantage.

“When we were guessing at how much to run ventilation fans, sometimes we’d dry the grain down too far and lose money when we marketed it,” she says. “Also, running the fans too long can cost a significant amount in energy bills.

“We farm like we’re going to be here forever,” she says. “If we don’t manage to be profitable, we won’t be farming or feeding anyone. With our no-till management coupled with cover crops and the adoption of precision technology and efficient irrigation systems, we’ve not only saved money over the years, but we’ve repaired our soils and set our farm up to be productive for generations to come.

Offering Efficiency and Flexibility, Autonomous Power Platform Ushers in the Future of Farming