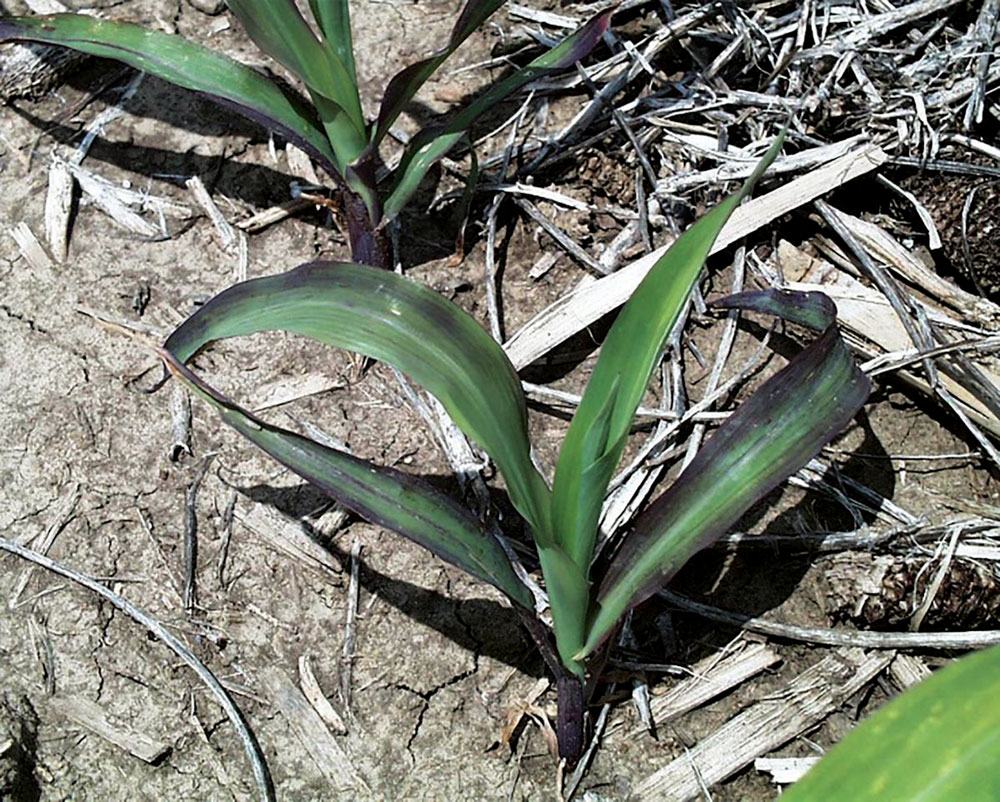 By Julia Gerlach posted on May 27, 2021 | Posted in Nutrient Management, Soil Health

Soil microbes may be hidden from view below ground but clues to how they’re affecting soil health can be readily seen by the naked eye, says molecular biologist Dave Stark.

Pictured Above: PHOSPHORUS BOUND. While purple corn is often considered a sign of low phosphorus (P), molecular biologist Dave Stark says this could in reality be a sign that there aren’t enough microbes in the ecosystem that can convert soil P to a plant-available form.

IT’S BECOME widely understood that a single teaspoon of soil contains thousands of different species of microbes, and more than 1 billion individuals.

The soil microbiome — the community of organisms living below ground — is made up of bacteria, actinomycetes, fungi, algae, protozoa and nematodes — all of which have different roles to play, from turning organic matter into nutrients to inducing plant rooting to fighting other microbes.

According to Dave Stark, a molecular biologist and biochemist who serves as president of Holganix, there’s a growing understanding that soil microbes are the key to building healthy soils that hold water and nutrients, and allow air, oxygen and water to penetrate for optimal nutrient cycling.

“Healthy soil is built primarily through the interaction of roots and microbes,” Stark said in a recent webinar hosted on the No-Till Farmer website. “Organic matter left on the soil surface, such as plant residue, manure, biochar, etc., contributes to the accumulation of soil organic matter. But two-thirds happens below ground, coming from roots and microbes.”

While there’s overlapping functionality between the various organisms, the microbes aren’t evenly distributed everywhere, so plants have to work hard to attract the help they need.

“Put microbes on your worst ground first, because…

Premium content is for our Digital-only and Premium subscribers. A Print-only subscription doesn't qualify. Please purchase/upgrade a subscription with the Digital product to get access to all No-Till Farmer content and archives online. Learn more about the different versions and what is included.
KEYWORDS building a healthy soil microbiome Dave Stark Holganix microbes and Nutrient cycling microbes for soil health

Soil Amendments May Be Missing Piece Of The Production Puzzle

[Webinar] Digging into Soil Health: The Role of Soil Microbes