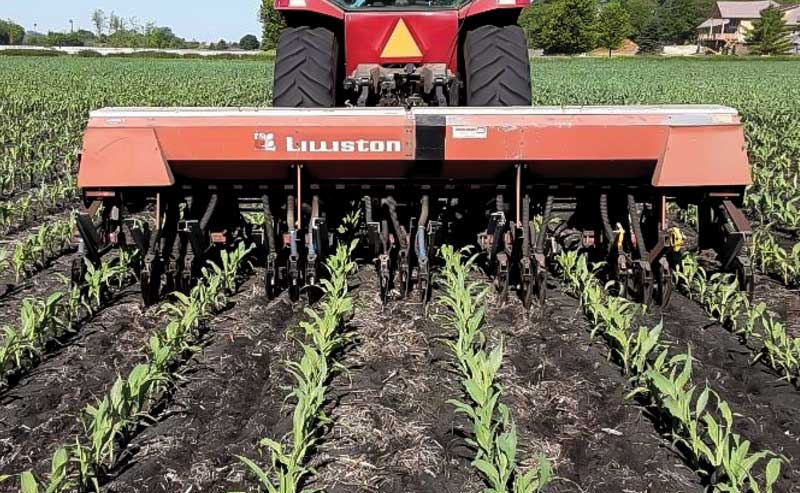 Palmyra, Wis., no-tiller Tom Burlingham specializes in hay and alfalfa but his diverse rotation is maintaining his soils and reducing inputs.

Pictured Above: INTERSEEDING EXPERIMENTS. For corn no-tilled after soybeans, Tom Burlingham likes to interseed a cover crop at about V3-V4. He uses a Lilliston grain drill, with the disks rearranged to seed five sets of three rows of a mix of ryegrass, cowpeas, rapeseed, flax and medium red clover

No-tilling near Palmyra in southern Wisconsin on land just across the road from his childhood home, Tom Burlingham and his wife, Margaret, got a wake-up call about wind erosion during the 1981 planting season. It was the first year after they bought the farm from Tom’s parents.

While preparing to put in a hay stand, Burlingham applied manure over the winter, worked the ground in the spring and seeded 15-16 pounds of alfalfa and 2 bushels of oats per acre.

“Then the wind started to blow,” Burlingham says. “We had 30-40 mile-per-hour winds, and they blew the seeding out. Gone.”

With his light, sandy soil drifted up along the fencerow and a quarter-inch of soot lining the windowsills, Burlingham knew he needed to do something different if his farm was to succeed.

“I started wondering if it was possible to grow a crop with residue sitting on the field. Most people at the time said it couldn’t be done.”

Premium content is for our Digital-only and Premium subscribers. A Print-only subscription doesn't qualify. Please purchase/upgrade a subscription with the Digital product to get access to all No-Till Farmer content and archives online. Learn more about the different versions and what is included.
KEYWORDS growing alfalfa John Deere 1560 Lilliston grain drill mixed hay Tom Burlingham winter camelina