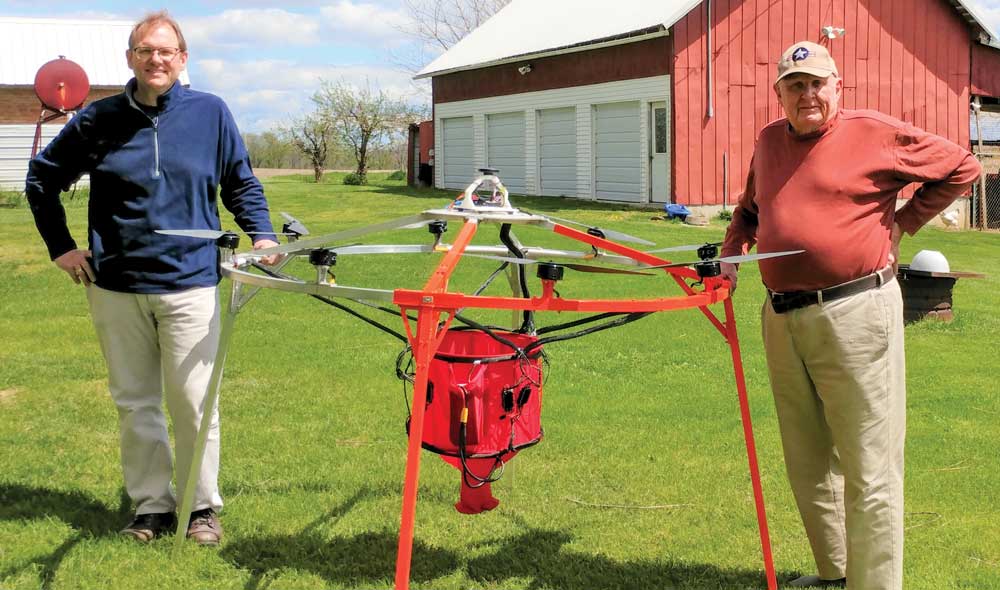 By Jack Zemlicka posted on May 30, 2020 | Posted in Precision Agriculture

Pictured Above: FLIGHT NAVIGATORS. Tom Leitgen (l) and his father, Loyal, developed the AeroSeeder unmanned aerial vehicle cover crop seeder. The 2020 model has a 40-pound payload, with a maximum flight weight of 80 pounds

SEEDING COVER CROPS is often more art than it is science. But if the last few years have taught no-tillers anything, it’s that flexibility and timing are critical to getting a cover crop established during the available window of opportunity.

Growing up on a no-till farm in Garnavillo, Iowa, Tom Leitgen gained an early appreciation for the value of conservation tillage practices. While the family transitioned away from full-time farming in 1965 and began renting out the land, Leitgen and his father, Loyal, have maintained their commitment to sustainable farming methods on their 300-acre corn and soybean operation.

“In 2013, the farm operation had annual ryegrass applied with a crop duster and because it was applied so late in the fall, it never got established. Our experience was that crop dusters tended to be under a lot of pressure and cover crop application was often an afterthought,” Leitgen says. “I had a lot of experience in model aviation and it seemed like developing a drone to apply cover crop seed would offer some flexibility, especially for smaller-acreage farmers and allow them to get into the field quickly.”