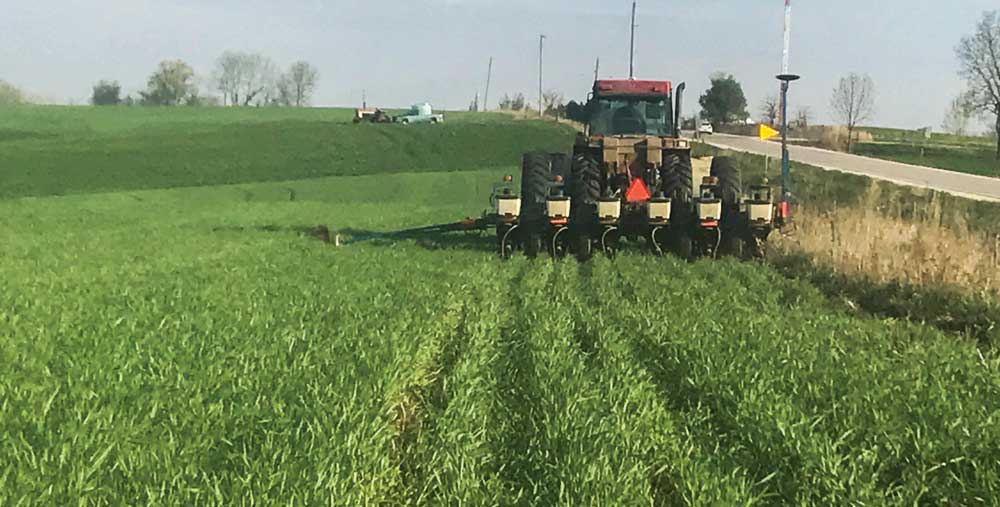 Using cattle to manage corn-on-corn residue helped push this Iowa farm to 100% no-till. Now covers are taking them even further.

Pictured Above: PLANTING GREEN. Spring grazing keeps cereal rye in check. The Smiths plant into the green cover crop and then do a delayed herbicide application that combines burndown and residual for one-pass control

THE DAY WE realized we don’t need tillage to manage heavy corn-on-corn residue because we have cows to graze it was the day we were able to shift from dabbling in no-till to committing 100% 3 years ago.

Tillage had long been on its way out on our farm. For a decade or more we had been no-tilling corn after alfalfa, corn into soybean ground and soybeans into corn stubble. It was our corn-on-corn acres, which make up most our farming acreage, that kept us from being 100% no-till for so long. We had success no-tilling corn-on-corn, too, but we were largely clinging to one light tillage pass prior to planting.

In addition to this revelation, two other factors helped get us over the final hump to fully committing to no-till. One was having a proactive neighbor with a similar system, no-tiller Tim Daly, to serve as an example and provide encouragement. The second push came from watching our soils erode.

In spring 2016, we made our light tillage pass as usual and planted corn. The seedlings were just spiking out of the ground when we got a hard rain. We watched our soils flow away with the water and became determined to prevent soil losses in the future. We haven’t done any tillage since.

Premium content is for our Digital-only and Premium subscribers. A Print-only subscription doesn't qualify. Please purchase/upgrade a subscription with the Digital product to get access to all No-Till Farmer content and archives online. Learn more about the different versions and what is included.
KEYWORDS grazing livestock on cover crops no-till corn-on-corn transitioning to no-till