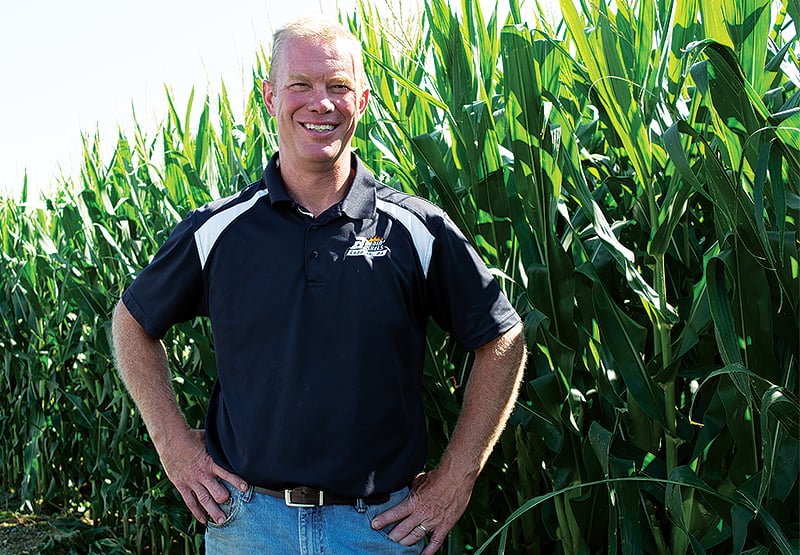 No-tiller Darren Grumbine has logged 300-bushel-per-acre corn by taking care of the soil and managing nutrients efficiently and responsibly.

Darren Grumbine is leaving no stone unturned in his quest to maximize yield production on his no-till operation, whether that means tweaking equipment or casting a critical on eye on long-held assumptions about nutrient and disease management.

Grumbine and his wife, Kristen, bought the 600-acre farm near Lebanon, Penn., from Kristen’s parents 12 years ago, selling the tillage equipment and going to 100% no-till save for some passes with a vertical-tillage unit. Mostly spared from the shale knobs and rocks in soils a few miles to their north, Grumbine’s in-laws never had a total crop failure in their mostly silty clay loams.

Grumbine has definitely noticed the increased presence of earthworms since he converted to no-till practices. He once pulled a corn plant about 24 inches tall and found it had a 36-inch root. “I pulled that plant straight up. It had to be just cruising down an earthworm channel.”

Research completed on their farm showed their soils were capable of infiltrating 15 inches of rain per hour, which was beat locally only by their neighbor, whose farm tested at 16 inches. The Pennsylvania corn yield champions in the no-till, non-irrigated category in 2017 and 2018 celebrated last fall after finally breaking the 300-bushel-per-acre barrier with a contest-field average of 308 bushels an acre.

The Secrets of No-Till Yield Champions