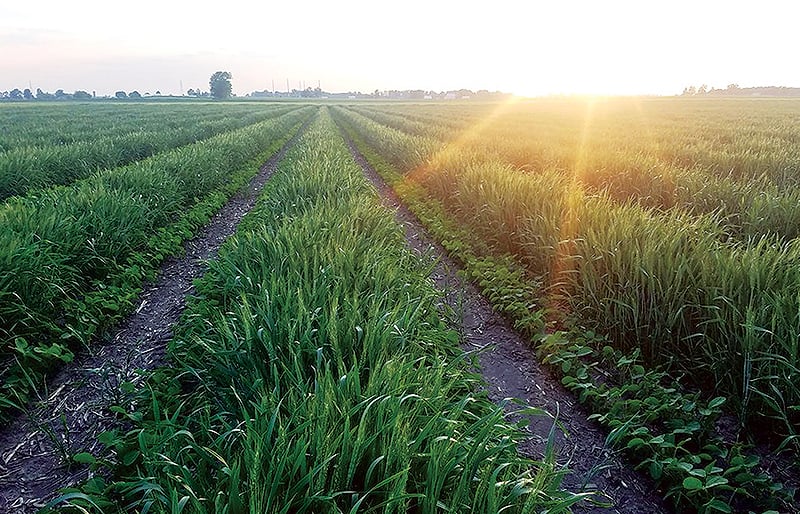 On Twitter one day, Jason Mauck revealed that his wife asked him if he thinks in complete sentences or not. “No,” he told her, “it’s more like spectrums — abstract and non-verbal.” Talking with him, he often seems tangential but then manages to knit concepts together, creating a wholistic picture from seemingly disparate parts.

The Constant Canopy system Mauck has implemented on his a 400-acre portion of his farm seems like a natural extension of his thought process. As he looked at the constraints, bottlenecks and hurdles his operation faced, his ideas coalesced. Mauck saw how he could utilize the voluminous amounts of manure created by his operation’s 12,000 hogs while making better use of available water and sunlight to grow crops in somewhat surprising ways.

Like any disruptor worth his salt, he’s heard many times that his ideas won’t work. But year by year he continues to tweak his approach and has zeroed in on a system of polycropping that captures sunlight and carbon while suppressing weeds and managing water and nutrients.

After several years of working in landscaping, Mauck came back to his family’s 3,100-acre farm near Gaston in northeastern Indiana and quickly found himself questioning the traditional farming methods…

Premium content is for our Digital-only and Premium subscribers. A Print-only subscription doesn't qualify. Please purchase/upgrade a subscription with the Digital product to get access to all No-Till Farmer content and archives online. Learn more about the different versions and what is included.
KEYWORDS 60-inch corn 60-inch wheat biochar Constant Canopy EcoChar Jason Mauck relay intercropping