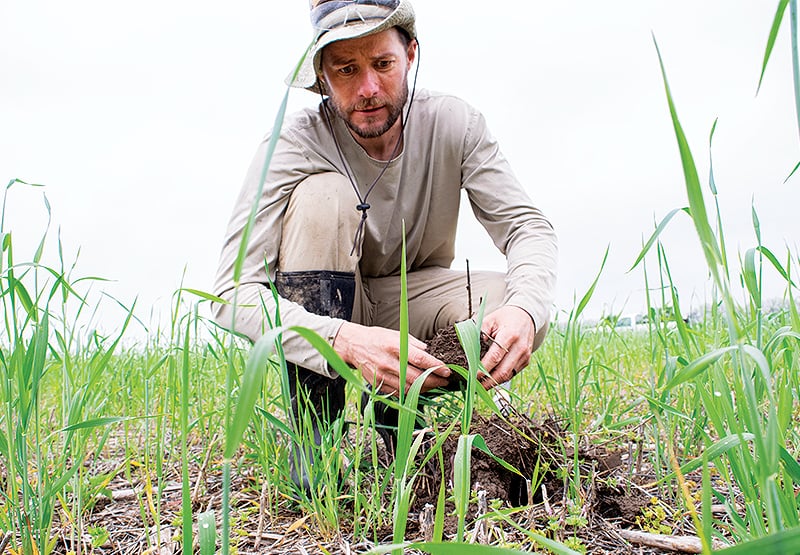 ‘Getting Off the Treadmill’ for Better Soil Health

For some time, Luke Linnenbringer felt like he was on a treadmill trying to farm profitably in a conventional-tillage system with degraded soils and stagnant yields. In fact, he was ready to stop cropping nearly a decade ago.

Instead, he listened to advice from a couple of titans in the no-till movement and decided to make changes. After switching to a 100% no-till, cover-crop system in 2012, Luke says he’s seeing important changes to his soil profile.

Prior to his systems change, Linnenbringer says, the Mexico clay loam soils on his farm would be a smeary mess after it was worked due its high clay content. Most of his fields have about 9-10 inches of topsoil above the “B layer,” which is about 90% clay.

“That builds ponds really well. We’re always 2 weeks from a drought or flood because we don’t hold much water,” he says. “When I did a slake test when I first started no-till it was terrible. There was no soil structure. Now, every 6 months to a year, I fill up the glass of water and do the test again and the soil clod is still sitting there from years of having just soaked in water, basically. So my soil just does better now.”

Linnenbringer farms about 1,000 acres, including 300 acres of cash crops and 700 acres for grazing, near Hatton in central Missouri. His beef cows and chickens are raised on pasture and Linnenbringer direct-markets the beef, eggs and chicken to…

Premium content is for our Digital-only and Premium subscribers. A Print-only subscription doesn't qualify. Please purchase/upgrade a subscription with the Digital product to get access to all No-Till Farmer content and archives online. Learn more about the different versions and what is included.
KEYWORDS closing wheels high-clay soils John Deere Planter Luke Linnenbringer row cleaners slake test Yetter Carry-All

[Podcast] Strategies for Getting Off the Starting Block with Cover Crops: Part 2