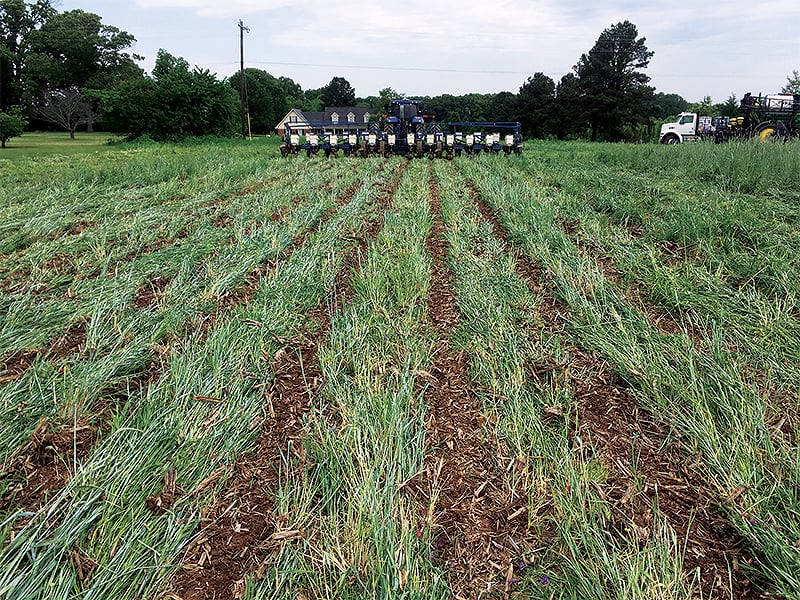 While many no-tillers believe cover crops are critical to improving soil health, many avoid planting corn after cereal rye due to concerns about allelopathic chemicals or other problems. This creates tough choices, especially for northern growers who like rye due to its cold tolerance.

Research has shown corn following a cereal rye cover crop has taken as much as a 20% yield hit, perhaps due to pathogens that carry over from cereal rye to corn (green bridging), allelopathy, nitrogen (N) immobilization or other factors.

The most common way to counteract this effect is to terminate the rye 10-21 days before planting corn, along with applying a portion of N fertilizer at planting.

Seeking other practices that could optimize a corn-after-rye program, five  Iowa farmers teamed up with the Practical Farmers of Iowa in 2017-18 to test whether creating cover crop “skip zones” while seeding cereal rye, and planting corn into those skip zones, could be a beneficial practice.

The participating farmers were Jon Bakehouse in Hastings; Jack Boyer, Reinbeck; Mike Jackson in Oskaloosa, and Loran Steinlage in West Union, and Michael Vittetoe in Washington. The previous crop was soybeans in all locations.