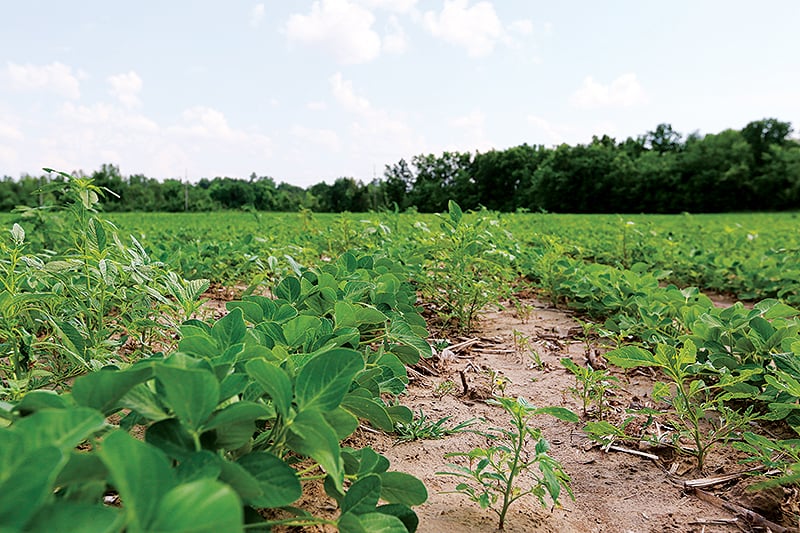 By Dan Crummett posted on December 25, 2019 | Posted in Crop Protection

The discovery of waterhemp that is tolerant to a seventh class of herbicide action means growers have to double down on weed management by including cultural and mechanical controls to fight resistance.

As farmers across the Corn Belt were wrapping up the 2019 harvest, the buzz among corn and soybean producers centered on reports from Illinois that the tough-to-control weed, waterhemp, had shown resistance to yet another class of chemical weed control — those in Group 15.

“Herbicides are grouped into classes based on their mechanism of action (MOA), or the specific target within a plant that’s vulnerable to the compound’s attacks,” says Aaron Hager, University of Illinois weed scientist. “Because of various regulations and biological and agronomic realities, a limited number of herbicide MOAs can be used on any given crop and the suite of weeds that accompanies it.

“Historically, about nine herbicides have been useful for waterhemp — and now the weed appears to be resistant to at least seven of those,” he explains.

To date, waterhemp is documented resistant to the following herbicide classes:

Hager’s associate in reporting the latest development, and head of Crop Sciences at Illinois, Adam Davis, says in some areas, growers are only one or two MOAs away from completely losing chemical control of waterhemp and other multiple-herbicide-resistant weeds. “There are no new herbicide MOAs coming out. There haven’t been for 30 years,” he adds.

“We don’t want to panic growers, but they need to…

Premium content is for our Digital-only and Premium subscribers. A Print-only subscription doesn't qualify. Please purchase/upgrade a subscription with the Digital product to get access to all No-Till Farmer content and archives online. Learn more about the different versions and what is included.
KEYWORDS herbicide resistance in weeds herbicide-resistant waterhemp no-till weed control

Stretch Out Residuals to Control Waterhemp