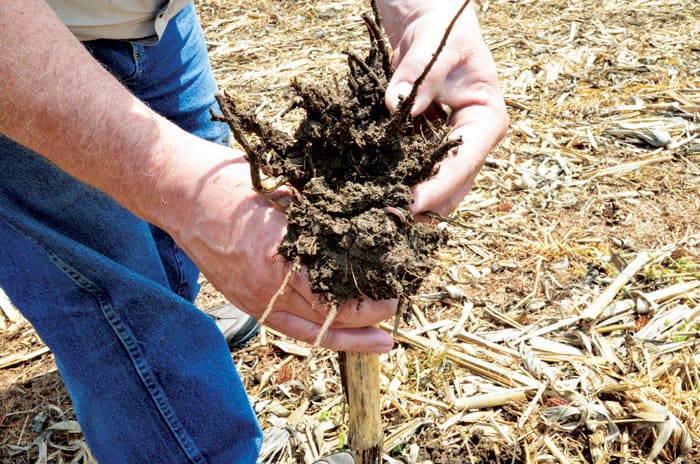 Mark Montel’s long-term commitment to no-tilling and soil tilth is rebuilding his shallow, rocky soils and blowing his corn and soybean yields well past county averages.

Although more than two decades of no-till practices have been good to Mark Montel, 8 years ago he describes hitting a wall as his regular soil tests showed he wasn’t building soil organic matter very quickly.

No-till practices weren’t doing enough to improve his soil resource. So Montel shifted his priorities to building soil health and it’s paying off: Montel harvested an average of 197 bushels of corn per acre across the farm last fall, and 72-bushel soybeans — both records for his 500-acre operation in central Indiana and way above county averages.

He isn’t sure if the poultry litter, volunteer buckwheat, foliar micronutrients or pre-plant sulfur applications did the trick with soybeans, but he’s thrilled with his yields. “I think I’m getting to point where I’m seeing some benefits in building up soil health. I heard other people around here had good corn yields but not those kind of soybean yields.”

Mark Montel no-tills about 200 acres each of corn and soybeans and 100 acres of soft red winter wheat near Claypool, Ind. He’s been no-tilling for more than 25 years, starting in 1988 after making some trips to Jim Kinsella’s farm in Illinois to learn about the practice.

“I can remember going out there and learning how earthworms populations would increase if you no-tilled. Jim was actually feeding his earthworms,” Mark says. “In the middle of the summer his corn ground was running out of residue for the earthworms to eat, so he was trying to…