A new disease affecting corn might have blown in on the recent “bomb cyclone,” and a Texas A&M AgriLife Extension Service specialist said producers should be aware of what might make its way to their fields later this year.

Corn tar spot was introduced into the U.S. in 2015, first in Illinois and Indiana, said Dr. Ken Obasa, AgriLife Extension plant pathologist, Amarillo. Cases of the disease have since been reported in Iowa, Michigan, Wisconsin and Florida in 2016, 2017 and 2018.

Before moving into the U.S., the disease was confined to Mexico, Central America and some parts of South America. It is believed a tropical storm introduced the disease into the U.S. from Latin America.

“As such, the March 2019 bomb cyclone that hit several parts of the U.S. including northern Texas and some of the states with confirmed cases of tar spot, such as Michigan, Indiana, Illinois and Iowa, should concern corn stakeholders in the Texas High Plains,” Obasa said.

Disease development is reported to be favored by cool, wet conditions, he said. Symptoms start as oval to irregular bleached to brown lesions on leaves. Within the lesions, the fungus produces black spore-producing structures called ascomata, which have a fish-eye-like appearance. The black structures protrude from the leaf surface, making it feel rough to the touch.

Affected leaf surfaces may become densely covered with the lesions, and associated ascomata similar to rust pustules and lesions may even coalesce to affect larger areas of the leaf, according to reports. Symptoms could be mistaken for similar-looking disorders like old rust lesions or even insect frass. 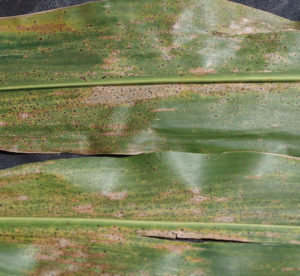 Losses of up to 60 bushels per acre have been reported in areas with severe infections, he said. Even when infections do not affect yield, there’s still a potential for it to compromise stalk integrity or strength in affected plants.

“In the High Plains of Texas where high winds are prevalent, this could cause lodging, resulting in significant economic impact from an otherwise non-severe level of infection,” Obasa said.

Investigations are ongoing to learn more about the disease, and several hybrids are being screened for resistance in affected states, he said. Currently, almost all corn hybrids in the U.S. are reported to be susceptible to the disease. The hybrids identified as being resistant to the disease in Latin America are not adapted to this region.

Obasa said the reason he is providing the heads-up to area producers is that states with confirmed cases report the disease has the potential to become endemic in an area following an initial infection episode.

“Growers, especially, should pay very close attention to their crops this season and be on the lookout for the symptoms of this disease,” he said.

Fortunately, Obasa said, a few fungicides labeled for the control of tar spot in corn are already available, including Syngenta’s Trivapro, which also is labeled for leaf blight, rusts, gray leaf spot and smuts among other diseases in corn.

An early season application – V4-V8 growth stages – is recommended for disease control and plant performance benefit, according to the chemical label. Applications can also be made when a designated target disease first appears.

“In the event that symptoms similar to those of tar spot are observed or even suspected by a grower, AgriLife Extension agent or agriculture consultant, please notify us at the Texas High Plains Plant Disease Diagnostic Laboratory at the Texas A&M AgriLife Research and Extension Center in Amarillo immediately,” Obasa said.

He also advised growers and others to collect and send samples to the diagnostic laboratory for diagnosis and confirmation. Samples should be sent to Texas High Plains Plant Disease Diagnostic Lab, 6500 Amarillo Blvd. West, Amarillo, TX 79106.

Tar Spot on Corn Confirmed in the U.S.