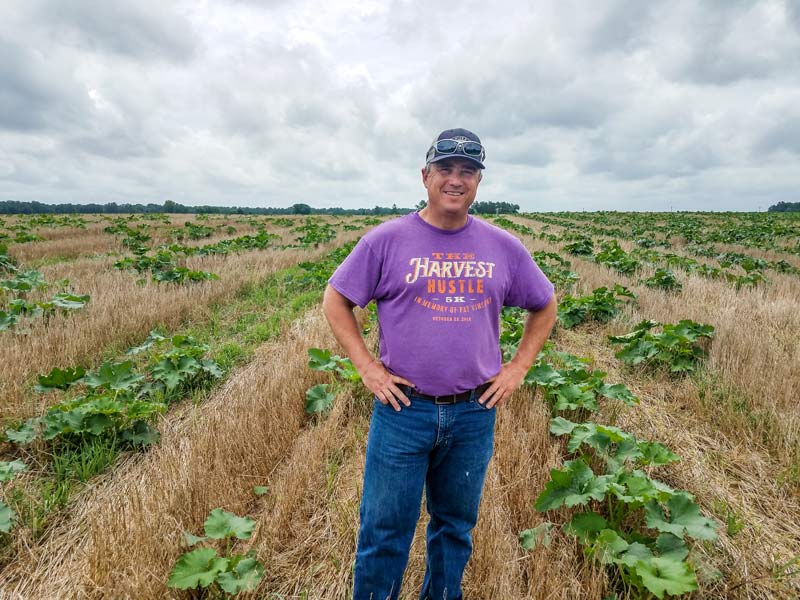 If it weren't for no-tilling, the Fifer family would have gotten out of the pumpkin business long ago, says Bobby Fifer.

When he was a child, his family started with about 5 acres of pumpkins on Fifer Orchards in Camden-Wyoming, Del. Growing up, his family became contract growers for a company in North Carolina, which provided them with enough demand to slowly climb to 100 acres about 20 years ago.

But their forward progress was dealt a serious blow when they lost their entire crop 2 years in a row due to phytophthora, a disease they continue to fight. The pumpkins had direct contact with freshly cultivated soil, making the widespread rot inevitable.

“Once we realized what was going on, we said to ourselves, ‘Alright let’s give this one more chance, but we’ll try no-tilling to see if we can try to separate the soil from the pumpkin better,’” Fifer recalls. “It was so successful we never went back. Within a few years we went from less than 100 acres all the way up to around 550 acres now.”

More in the Bins

Fifer says the benefits of no-tilling are well known today among pumpkin farmers, as most people would be hard pressed to find anyone planting them in tilled ground in his area.

Quantified by bins per acre, pumpkin yield shot up for the Fifers from two back-to-back years of lost crops to 40 bins per acre immediately after switching to no-till. He also saved two cultivator passes across…

Premium content is for our Digital-only and Premium subscribers. A Print-only subscription doesn't qualify. Please purchase/upgrade a subscription with the Digital product to get access to all No-Till Farmer content and archives online. Learn more about the different versions and what is included.
KEYWORDS Fifer Orchards no-till rotation no-tilled pumpkins no-tilling pumpkins planting green pumpkins and cover crops