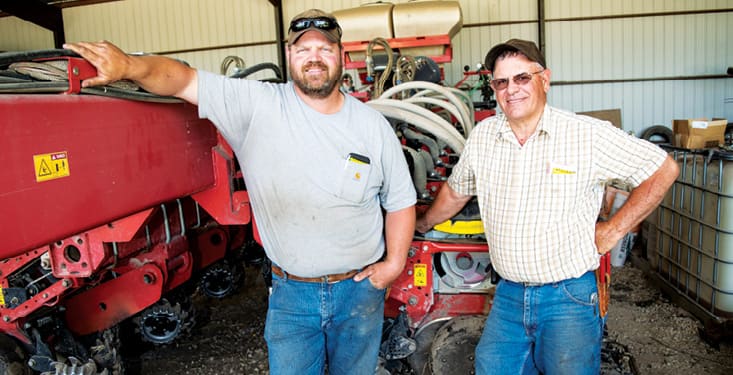 On paper, Jarrod Lawrence and his father Terry are supposed to see about 32 inches of precipitation per year, which should be adequate to raise profitable crops.

But the moisture doesn’t always fall when it’s needed in Kansas and many farmers talk about always being 2 weeks away from a drought. Rain falls in sheets during spring storms, only for the spigot to shut off for weeks or months at a time afterward.

So preserving moisture was the top reason the Lawrences began converting their farm to no-till practices in 1997. At a time when they were transitioning Jarrod’s grandfather out of day-to-day work and adding more acreage, the efficiencies were welcomed.

“We decided to give it a whirl and kind of just jumped with both feet in. We just went whole hog,” Jarrod says.

The Lawrences are no-tilling corn, soybeans and winter wheat and a small amount of grain sorghum (milo) near Oxford in central Kansas. They also some alfalfa, but hire someone to make a pass with a vertical-tillage tool to prepare fields for seeding.

Their soil types range from thin, rocky clays in upland areas to sandy loams closer to the Arkansas River, and from blow sand to gumbo in riverbottom areas. Prior to going no-till the Lawrences were discing, chisel plowing and…