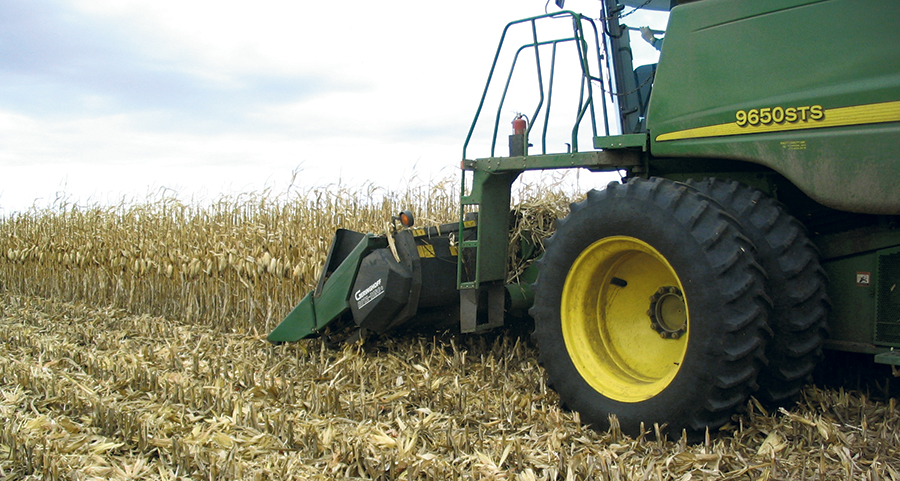 The trend to continuous corn, twin-row corn and Bt hybrids is shifting the task of managing increased residue to the corn head.

It used to be that the primary task of a corn head was to harvest corn: separate the ear from the stalk with as little grain loss as possible, while collecting as little trash as possible, says Marion Calmer, a no-till farmer with Calmer Corn Heads in Alpha, Ill. But as growers look to better integrate field operations, the corn head is playing an increasingly important role in managing crop residue as well.

According to Calmer, no-tillers and strip-tillers have long been cognizant of the need to efficiently manage corn stover to minimize wind and water erosion, and enhance microbial activity without hindering crop yield. But with the advent of continuous corn and Bt hybrids, residue management has taken on a new dimension that starts at the corn head.

While some growers run through the residue with a chopper or shredder, this isn’t the best option these days, says Phil Needham of Needham Ag Technologies in Calhoun, Ky.

“In my opinion, these devices don’t spread the residue evenly and tend to windrow it, leaving heavy mats of material in some areas and no residue in others. This operation also adds another field pass,” says Needham. “Management of the residue at the corn head is the preferred approach.”

“Ideally, corn heads chop and lacerate while allowing the stalk to hang together by a few threads,” says Calmer. “At the same time, the residue remains bulky enough to allow air in to enhance soil drying.”

“The number-one driver in…