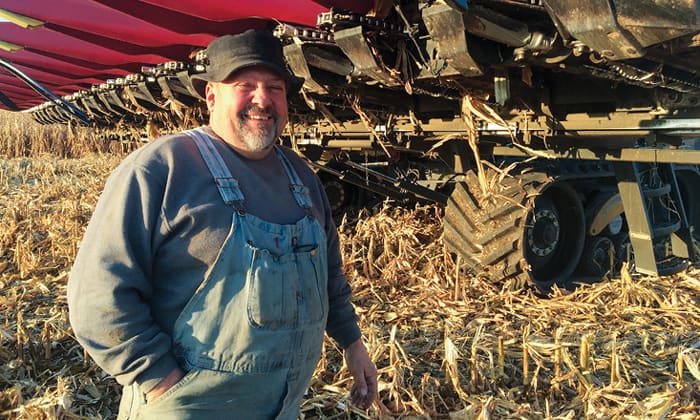 By Jack Zemlicka posted on September 15, 2018 | Posted in Residue Management

Managing corn residue can be as much an art form as a science, requiring a combination of the right tools to match a farmer’s objectives.

For more than 2 decades, Beaver Dam, Wis., no-tiller and strip-tiller Charlie Hammer has experimented with residue sizing and spreading systems on his combine, including chopping corn heads and knife rolls.

The residue management systems Hammer previously ran produced mixed results, and he says he struggled with consistently being able to find an ideal solution to evenly distribute residue, while also avoiding buildup, on his 1,900-acre operation.

Hammer also experimented with a factory-model chopping corn head on his Claas Lexion 740 combine. After promising results during the first 2 years, he ran into issues with having a mat of residue forming between corn rows.

“We were pulling our hair out for years because we really had challenges with being able to find an alternative to the factory systems on the 12-row head of our Lexion combine,” Hammer says. “One of the biggest issues we saw was that because the knife systems cut horizontal, that 12th row would push the residue to the outside, then do the same thing on the next pass to create a windrow of residue. We could almost bale the rows with a round baler because there was so much residue between rows.”

Premium content is for our Digital-only and Premium subscribers. A Print-only subscription doesn't qualify. Please purchase/upgrade a subscription with the Digital product to get access to all No-Till Farmer content and archives online. Learn more about the different versions and what is included.
KEYWORDS chopping corn heads new stalk roll technology sizing continuous corn residue

Test Plots Give No-Tiller A Chance To Learn By Doing