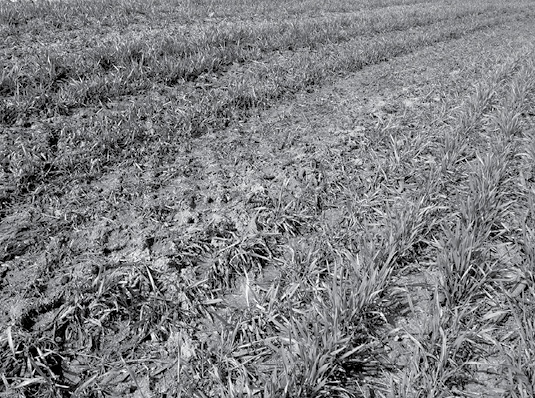 By Darrell Bruggink posted on September 1, 2008 | Posted in Nutrient Management

No-tiller Jeff Frey finds broadcasting manure into a wheat cover provides even distribution of nutrients without the concern of runoff.

As a hog producer, Jeff Frey has a valuable asset with fertilizer prices rising rapidly. Yet, the Willow Street, Pa., no-tiller knows applying and managing hog manure in a no-till system has its challenges.

Unequal distribution, compaction, runoff and odor are just some of the challenges that Frey needs to contend with at his farm located on the southern outskirts of the city of Lancaster.

While he has tried injecting manure in the past to avoid runoff and odor concerns, the addition of cover crops has allowed him to go back to broadcasting manure.

“We’ve tried different things with manure,” Frey says. “The last injector we tried had a horizontal shank on it that would slice a path 12 inches wide. It just sort of lifted the soil. The manure would be injected underneath, and then it had little closers that pulled the soil back on top.

“It didn’t work too bad, but it still left streaks where you had bands of manure and places where there was no manure. It was also disturbing more soil than what I wanted to see and it moved some residue.”

With the addition of a wheat cover crop, Frey has turned back to broadcasting manure on his farm.

“I feel broadcasting manure is the best way overall for getting a nice coverage of manure,” Frey says. “Also, the cover crops are there to absorb the manure.”

Due to the feed demands for hogs, two-thirds of Frey’s cropland is in corn…

Premium content is for our Digital-only and Premium subscribers. A Print-only subscription doesn't qualify. Please purchase/upgrade a subscription with the Digital product to get access to all No-Till Farmer content and archives online. Learn more about the different versions and what is included.
KEYWORDS compaction manure Pennsylvania Wheat