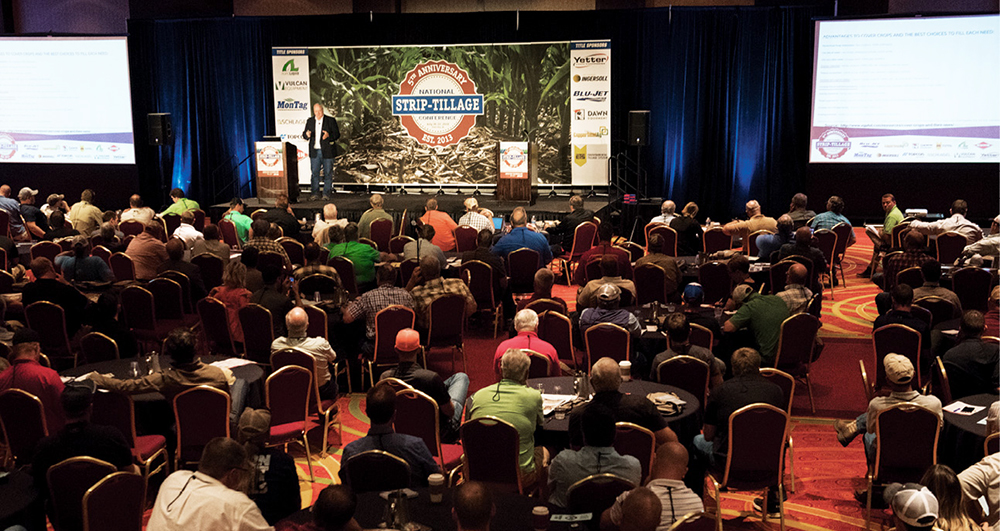 As Attendees at the fifth annual National Strip-Tillage Conference began filtering in for the start of the event, a newcomer to the practice overheard a conversation between a couple of experienced strip-tillers who were chatting about nitrogen (N) application experiments.

He asked to join them, and candidly admitted, ‘You two know a lot more than me and I’d love to pick your brains.’ More than an hour later, the three farmers were still engaged in discussion, with several pages of visible notes in front of the new strip-tiller.

The scenario personified the collaborative, knowledge-sharing environment of the 2-day event which drew a crowd of 360 farmers, researchers and industry professionals to Iowa City, Iowa, July 26-27.

Throughout the course of seven general session speakers, 12 classroom discussions and 20 roundtables — along with extensive networking opportunities — attendees exchanged ideas and formed new connections as they sought tips for managing profitable strip-till operations.

Kicking off the conference was Reinbeck, Iowa, strip-tiller Jack Boyer’s presentation on successful cover-cropping practices when paired with strip-till. Boyer implements covers across 100% of his corn, seed corn and soybean acres.

Premium content is for our Digital-only and Premium subscribers. A Print-only subscription doesn't qualify. Please purchase/upgrade a subscription with the Digital product to get access to all No-Till Farmer content and archives online. Learn more about the different versions and what is included.
KEYWORDS Organic strip-till pounds per acre of cover crops Quarter-acre grid sampling Transitioning organic acres Weed control in strip-till