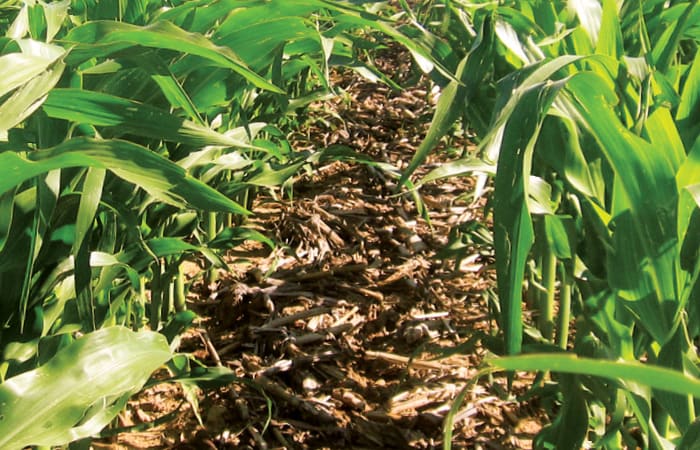 The corn and soybean rotation has been a winner for many no-tillers in the Midwest and Northeast for years. While some still encounter frustrating planting conditions in heavy corn residue, many find that years of no-till management have led to systems that make planting soybeans into corn stalks effective and routine.

“Bacteria, protozoa, microscopic insects, earthworms, beetles, ants, mites and fungi are beneficial organisms that are part of the soil food web that cycles nutrients,” he explains.

Keeping this life in the soil and disturbing the soil as little as possible builds soil biology over time. The bacteria, fungi and beneficial nematodes feed on residue, roots and other dead organic matter.

“Like other living creatures, those organisms also need food and water and shelter,” he says. “Their activity in the soil helps decomposition, which ultimately increases soil organic matter and allows a no-till planter to sail across the field.”

Brunsman says by planting time, the corn residue in his fields is “shredded from the bottom side” by the biological activity in the soil.

Premium content is for our Digital-only and Premium subscribers. A Print-only subscription doesn't qualify. Please purchase/upgrade a subscription with the Digital product to get access to all No-Till Farmer content and archives online. Learn more about the different versions and what is included.
KEYWORDS sharktooth row cleaners soybean planting into corn tough corn residue wayne brunsman

Bring CRP Land Back into Production with No-Till