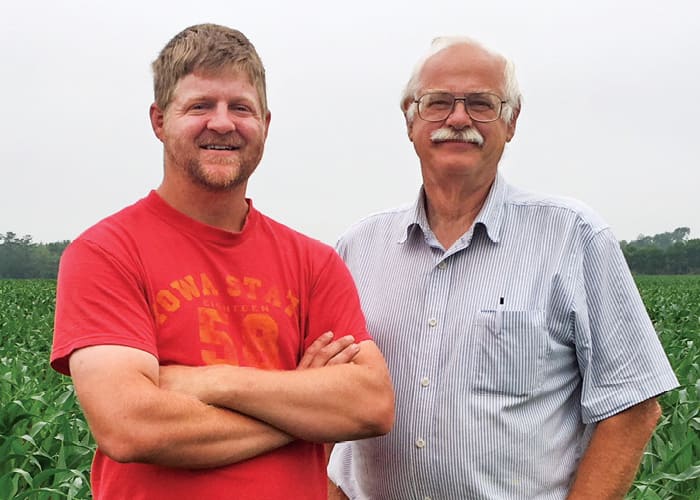 John and Tim Bruihler developed their 1,700-acre no-till operation through experimentation and marketing their no-tilled corn and soybeans wisely.

Pictured Above: MAKING NON-GMO WORK. Father and son no-tillers John and Tim Bruihler farm 1,700 acres of mostly non-GMO corn and soybeans around Hawkeye, Iowa, with another 300 acres of soybeans in Rushford, Minn. Growing a higher proportion of non-GMO crops has saved money in seed costs and resulted in premiums for soybeans

It’s been a journey for John Bruihler’s family and their no-till farming operations in Minnesota and Iowa — both literally and figuratively.

John’s father bought a family farm in the 1960s near Hawkeye, Iowa. It was rented out, prompting John to start dreaming of working his own farm at the age of 10.

In the early 1980s, while employed with U.S. Postal Service in Minneapolis, John and his wife Deb bought a 70-acre farm outside on Rochester, Minn. They no-tilled soybeans and vegetables and organized the city’s farmer’s market.

“I was going to save the world on 70 acres,” says John, “but I’ve been no-till from day one and never farmed any other way.”

Although he had to give up that farm, in 1991 he became postmaster in nearby Rushford, Minn., working days, farming nights and building up a new farm to 400 acres in course of 20 years.

At various points, John has owned properties in both New Hampton and Hawkeye, Iowa, while still no-tilling 300 acres and residing in Rushford. This means the Bruihlers often shuttled planters and their combine up to 70 miles one way during the growing season.

Premium content is for our Digital-only and Premium subscribers. A Print-only subscription doesn't qualify. Please purchase/upgrade a subscription with the Digital product to get access to all No-Till Farmer content and archives online. Learn more about the different versions and what is included.
KEYWORDS interseeding John Bruihler non-gmo corn non-GMO soybeans Precision Planting soybean crush plant tim bruihler