Judging from the number of calls received this year, the decrease of soil pH and increase in acres affected by aluminum (Al) toxicity is increasing in North Dakota and the region.

Decrease in soil pH happens largely as a result of near-surface application of ammonium-based fertilizers. In the soil, the nitrification process which transforms ammonium to nitrate results in the release of hydrogen (H+) ions, which is the definition of acidity. Over time, soils become more acid. Ammonium-based fertilizers include urea, anhydrous ammonia, ammonium sulfate, manures, crop residues, cover crop decomposition and green manures of all species.

In soils with high pH (greater than 7), which also tend to have carbonates that produce the high pH, the change in pH is minimal due to the ability of soils with carbonates to resist a change in pH and are termed ‘highly buffered’. However, many soils west-river not only started out immediately post-prairie as pH 7 or below, but the soil clays are kaolinitic, which means that the cation exchange capacity (CEC) of the clays are around 10 meq/100 g soil compared to illitic clay CEC of 20-30 meg/100 g soil and smectite CEC of 50-100 meq/100 g soil.

Therefore, the amount of acidity produced in many west-river soils produces a greater reduction in pH (greater acidity) than soils with greater illite/smectite content. A map of kaolinite/chlorite (a similar CEC clay) in North Dakota is provided. 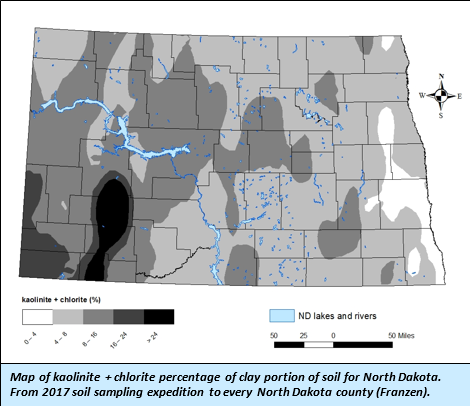 So far, most farmers/crop consultants who have found surface acidity have sampled the 0-6 inch depth of soil. To do a better characterization of the problem, the sampler must use a hand probe, kick the ‘duff’ out of the way and take a 0-2 inch core, and a 2-6 inch core. These are both important layers of soil to identify.

Soil pH less than 5.5 has negative implications for many, but not all crops we grow. However, when soil pH falls below 5, there is much more reason for concern. Aluminum becomes soluble below pH 5 and becomes even more soluble when the pH falls to 4.5 . Free Al can cause roots to become knobby and the internal plumbing of the plant root will clog and may result in no crop at all.

The treatment for acid soil is ‘liming’; the application of a carbonate mineral (calcium carbonate for example), or a hydroxide mineral (calcium hydroxide) or an oxide (calcium oxide), which converts the H+ ions to water, effectively neutralizing the acidity, resulting in increased pH and essentially insoluble Al.

The dilemma for a grower is that historically, much lime application is followed by tillage. Long-term no-tillers have wonderfully biologically active soils with great structure, resistance to climate variation and less requirement for fertility. Does lime really have to be incorporated?

The answer, so far, is no. Liming material may be applied to the soil surface, and the effect on the surface inch of the soil is almost immediate. The second inch is positively affected after a few months, and over years, the pH changes even at the 3 and 4 inch deep levels.

In Pennsylvania, initial 0-2 inch pH was 4.5. After 3 ton/acre lime application, pH increased in the 0-2 inch depth to 6.2, with increase in pH even at the 2-4 inch depth. Winter wheat yields increased from 52 bu/acre to 71 bu/acre the first year.

Work is being initiated in North Dakota to further investigate the effectiveness of surface application in no-till soils, but most of the current studies on the topic support surface lime application as an effective method to combat surface acidity and Al toxicity.