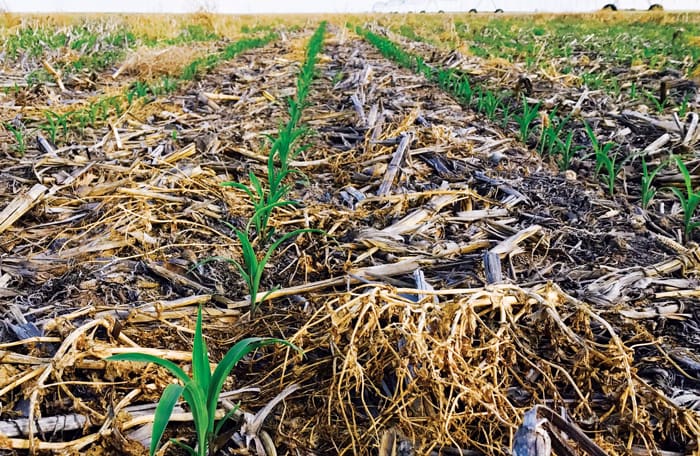 Nick Vos is pushing to overcome moisture challenges on his farm in southwestern Kansas by no-tilling and using covers to recycle available nutrients and keep his sandy soils protected.

When Nick Vos came from South Africa to the U.S. to farm, the transition wasn’t an easy one.

He grew up on a vegetable farm in the Limpopo Province of South Africa, North of Johannesburg. Their family lost everything in 2000 during a massive flood following 23 inches of rain falling in just over one week.

Every bridge along a 168-mile-long river in his area were taken out and the Vos family’s crops were without power for over 2 months. What didn’t flood, dried out and died.

Vos had the opportunity to move to the U.S. as a green card holder in 2006 and began farming with another enterprise. Vos’ family became U.S. citizens 5 years later.

In 2014, Vos started to farm on his own. no-tilling dryland and irrigated crops and raising sheep near Hugoton in southwestern Kansas. That same year he also started Prairie Seeds, selling seed corn and cover crop seed.

Vos farms about 1,000 acres, 300 irrigated and 700 dryland, no-tilling all corn, soybeans, milo and wheat where possible, as well as oats for hay. His wife Johanna started incorporating Dorper sheep into the operation 3 years ago.

After starting out with strip-till in…