In addition, residue and growing plants keep the sunlight energy off the soil surface, which reduces the soil temperature in the heat of the growing season, further reducing evaporation.

The living roots of cash crops and cover crops feed the soil biology by transferring sunlight energy and carbon (sugars in the root exudates) into the soil, improving soil health. Cover crops sequester carbon and provide protection from water erosion and wind erosion during both the growing and non-growing seasons.

Unfortunately, a number of acres still do not have adequate residue cover or growing vegetation to protect the soil during average weather events, let alone extreme events. Excessive tillage compounds the problem by destroying residue, which has an adverse impact on the soil’s physical, chemical, and biological properties, and destroying soil structure, which makes the soil denser and more susceptible to compaction.

This reduces soil porosity and air/water exchange in the root zone. A well-structured, healthy soil has better infiltration and enhanced moisture storage capacity, making it more resilient to weather variability.

While residue absorbs the energy of raindrop impact, it also creates small dams and obstructions along the runoff flow path, which

When flow velocity is reduced, there is more time for infiltration and runoff is reduced. Some particles already in the runoff water are deposited, reducing soil and nutrient losses. While flattened residue reduces evaporation by protecting the soil from the sun and wind, standing residue traps snowfall, increasing soil moisture. The trapped snow layer acts as insulation, keeping the soil warmer during winter.

In the heat of the growing season, flattened crop residue keeps the soil surface cooler by reflecting some sunlight energy back to the air and acting as insulation to keep the soil cooler. This cooler, moist soil allows for better root development, improving the standability and resilience of the crop.

Using no-till can save far more than fuel, labor, and equipment costs. The savings in soil moisture can be just as important, especially in a year when soil moisture and precipitation are short or when irrigation is costly or water supplies are limited. Too often soils dry to the depth of tillage. An average silt loam soil holds about 2 inches of plant-available soil moisture per foot of soil.

Tilling the soil can result in a loss of 1/2 to 3/4 inch of soil moisture with each trip. With multiple tillage trips, there may not be adequate soil moisture in the seed zone for uniform germination and emergence. Greater yet are the soil moisture losses from evaporation once tillage destroys the residue cover.

Research in irrigated conditions at North Platte showed that no-till corn yields in residue-covered plots were 17-25 bushels higher and no-till soybean yields were 8-10 bushels higher than in plots where the residue had been removed. For the four years of the study, the estimated water savings was 2.5 to 5.0 inches per year for the residue-covered plots compared to bare-soil plots.

In southwest Kansas, research at Garden City had similar results with the soil water evaporation being as much as 30% of the total evapotranspiration (ET) during the irrigation season without residue. Evaporation from a corn residue-covered or wheat straw-covered no-till soil surface amounted to 15% of the total ET, translating to a water savings of 2.5 to 4.0 inches. Both of these studies indicate that crop residue should be left in the field to save water and reduce irrigation costs.

Tillage also breaks up soil structure and pulverizes the soil surface, creating a condition that seals the soil, resulting in more runoff and less effective rainfall or irrigation. UNL research with a rainfall simulator at Sidney demonstrated that effect in a wheat-fallow rotation. More than 3.75 inches of water was applied in 90 minutes on continuous no-till before runoff started, compared to only 1.0 inch of water applied in 20 minutes on plowed ground.

With the improved soil structure of continuous no-till, infiltration also improves, reducing runoff even more. Research at the UNL Rogers Memorial Farm near Lincoln showed a much greater infiltration rate for no-till, over 4 inches per hour, than for tilled conditions, only 0.4 inches per hour, after 25 years of continuous tillage system evaluation. 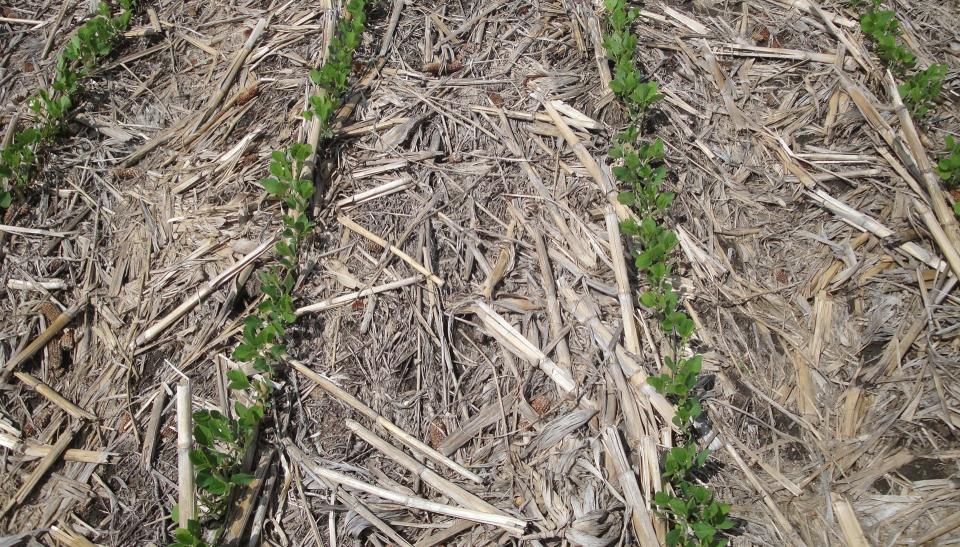 Similar results were measured at the UNL South Central Ag Lab near Clay Center after 30 years of continuous tillage system evaluation (Table 1). With better infiltration, storms of greater intensity will have less runoff and can provide more water in the soil profile for use later in the season.

Residue reduces but does not eliminate evaporation. Moisture evaporates from the soil, the residue itself, and from the crop canopy every time they get wet. This loss has been estimated at 0.08 to 0.1 inch each time. This is why light, frequent rains or irrigations are less effective than longer, soaking ones.

Many center pivot irrigators have problems with runoff on sloping, tilled soils so they apply small amounts frequently, typically only 1/2 inch at a time. One tenth of an inch evaporation from a 1/2 inch applied is a 20% loss, even more if runoff occurs.

When adopting continuous no-till under center pivot irrigation, the pivot can apply more water before runoff occurs (Table 1). With more water applied less often, the evaporation and runoff losses are reduced and irrigations can be scheduled to make better use of naturally occurring rainfall.

Cover crops will “grow” any water and nutrients that would otherwise be lost into a biological form while feeding the soil system. And with continuous no-till, the improved soil structure and healthier soil will enhance productivity and profitability.