Constant change, integration and diversification not only saved Gabe Brown’s farm, but also helped it thrive in tough conditions.

And try he does. Brown’s acres have a research farm feel. A trip up the driveway treats visitors to more than a dozen different crops from corn to radishes spread through only a few fields.

These crops are mixed together in complex polycultures that Brown has created through trial and error for maximum benefit to soil health, production and his bottom line.

But the city-raised Brown didn’t come by his adventurous agronomic spirit easily; nature gave him a not-so-gentle push.

Brown and his wife, Shelly, purchased their farm from her parents in 1991. The land was conventionally tilled and produced small grains.

After reading about no-till, Brown decided to jump in with both feet. In 1993, he sold the tillage equipment, bought a John Deere 750 no-till drill and went completely no-till. He also took his first foray into diversification by seeding field peas.

In 1995, Mother Nature dealt the Browns a nasty blow, hailing out 1,250 acres of spring wheat the day before harvest. The next year, they had 100% crop loss to hail again. 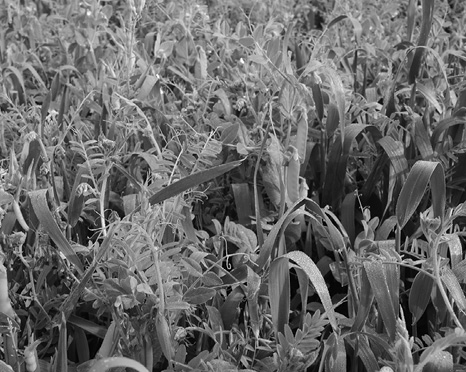 “Two years of crop failure hurt,” Brown says. “We started thinking about how we could cut back on our inputs because you can’t keep putting money in without getting something back.”

That’s when Brown started to experiment with crop combinations. He planted peas and hairy vetch or barley paired with red clover in an effort to help fix nitrogen for the major crops. But the weather wasn’t going to cut them any slack.

In 1997, severe drought resulted in not a single acre being combined. In 1998, the Browns once again lost 80% of their crop to hail. But for Brown, that wasn’t the end. It was just the beginning.

“Four years of crop failure was the best thing to ever happen to us,” Brown says. “It made us realize that we had to focus on soil health, soil structure and improved infiltration. If we did that, the soil would provide what we needed to produce crops efficiently.

“We also realized over time that we had to diversify the cropping system to make it more sustainable.”

Brown’s cropping system now mimics native prairie plant composition with a diversity of warm- and cool-season grasses and broadleaf plants. In the years since their dramatic crop failures, the Browns have managed to make great strides in reducing input costs.

“We’ve reduced commercial fertilizer inputs by more than 90% and herbicide inputs by 75%. At the same time, we’ve seen our yields increase,” Brown reports.

Monocultures are the exception, however. A peek in Brown’s no-till drill reveals a concoction that more closely resembles a birdseed mix than a planned crop. But looks are deceiving because a lot of planning goes into Brown’s planting scheme. Here’s a glimpse at a “typical” year on the Brown farm. 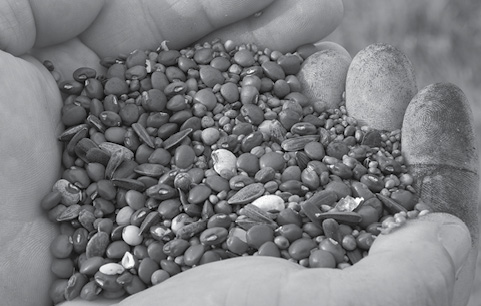 Brown starts seeding in mid-April with cold-tolerant crops, like a combination of field peas, radishes and turnips. Those crops are no-tilled into the remains of heavy-residue crops like corn. They are seeded without any herbicide or fertilizer inputs.

“We usually put radishes or turnips on most of the cropland to help infiltration,” Brown says. “Even after 15 years of no-till, you can see the old tillage layer. The deep-rooted plants help break up the compaction.”

After planting peas, Brown starts on the small grains combination, seeding a mix of barley and red clover and a combination of oats, peas, turnips and radishes before moving on to corn and sunflowers.

The peas are harvested as forage, haylage or dried hay, so there is no need to separate the different crops. In years that the peas are combined, the seed is easily separated.

“In most of our seeding combinations, the companion crop stays beneath the canopy and doesn’t take off and grow rapidly until the other crop is harvested,” Brown explains. “Then that companion crop serves as a cover crop.”

“As soon as we get one crop off the field, we’re seeding another crop,” Brown says.

“People say they can’t use cover crops because it’s too dry or the growing season isn’t long enough. But they’re doing it in Canada 300 miles north of here and they’re doing it in regions of Africa where they only get 2 inches of rain per year,” Brown says. “If Canada and Africa can produce cover crops in those conditions, anyone in the United States can do it. It’s simply a mindset.”

Brown says the purpose of cover crops goes beyond just covering the ground. They increase organic matter, which increases the water-holding capacity of soils and lowers soil temperatures. Deep-rooted cover crops also can bring deep nutrients to the surface to be recaptured by the crop.

“You might as well use the moisture to grow a cover crop and increase organic matter. It’s a good way to help alleviate water problems in an arid environment,” Brown says. “Our crops are able to withstand drought much better because we have increased the water-holding capacity of our soils and we get much higher utilization of the moisture we do have.

“We lose much less to evaporation because the soil surface is covered with residue and soil temperatures are cooler.”

Brown uses cover crops to address problems specific to each field. If infiltration is a challenge, he uses deep-rooted, taproot-type crops, such as radishes or turnips, to break up hardpan soils and improve infiltration. If the focus is on lowering inputs, he plants a legume-type crop to help fix nitrogen.

“One thing we do with cover crops is integrate crop and livestock production,” he says. “Instead of harvesting by mechanical means, we use our cow herd to harvest for us.”

Cattle graze cover crops from September through December. Besides saving “might-as-well-be-made-of-gold” fuel, Brown has discovered that getting cattle on cropland has a variety of benefits.

The hoof traffic helps get crop litter in contact with the soil surface, so fecal matter serves as fertilizer. The livestock get higher nutritional value forage, which relates to better rates of gain. And soil health is improved through increased organic matter, better infiltration and moisture conservation.

“Too many people look at livestock separate from cropping. We look at the system as a whole. It’s about what is best for the livestock and the crop,” Brown says. “For example, hairy vetch is tremendous for grazing and it fixes 100 to 150 pounds of nitrogen per acre. Plus, the cattle provide the phosphorus needs.”

His livestock operation also weathers drought better, thanks to this system.

“When we purchased the farm, we could only run 65 cows; now, we easily sustain 250 head and leave more forage than we ever grew before, because we are able to graze cover crops and rest our pastures,” Brown says. “When drought hits, we can easily sustain because we have a good supply of grass to fall back on.”

Along with low organic matter, water infiltration was a big challenge. When Brown started no-tilling, an NRCS water infiltration test on his fields showed that if it were to rain 1 inch, only 0.4 inches of rain would infiltrate in the first hour and only 0.25 inches in the second hour.

“In 2006, we had a 4-inch rain and it infiltrated so well that the agronomy center got in the field and sprayed corn the next day. Our neighbor had water sitting in his field for more than 6 weeks,” Brown recalls. “Our soil can infiltrate several inches per hour.”

Improving infiltration helps with extreme water situations, including getting more production with less precipitation. In 2005, Brown had a dryland corn field that received only 12.5 inches of moisture and it averaged 177 bushels per acre. The county average on a good year is about 80 bushels per acre. Brown regularly yields 127 bushels per acre.

Brown is the first to say that his farming practices are not a product of his invention alone. Brown works extensively with scientists, researchers, conservationists and community groups to uncover better practices and help other area farmers put those practices to use. For example, Brown works closely with Jay Fuhrer, the Bismarck NRCS district conservationist, to bring no-till and polycultures to other producers in the county and serves as a supervisor himself on the soil conservation district board. 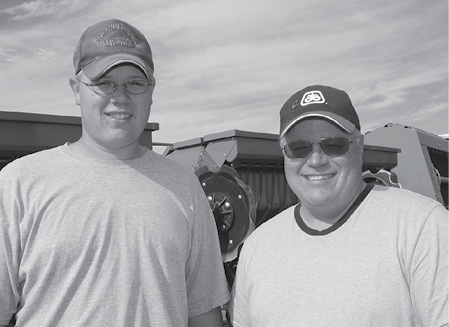 Brown also has teamed with Kris Nichols, a soil microbiologist at the ARS research center in Mandan, N.D. They are looking at secondary benefits of the polycultures that populate Brown’s fields, including how the plants interact, build better soil structure, make the soil more efficient at moving nutrients and water and more.

“One thing that we’ve found is that with the polycultures, we get a lot of mycorrhizal activity and symbiotic relationships among the plants,” says Brown.

They also look at the role soil organisms play.

“When we started, our soil organic matter was 1.7% to 2% on most fields. Today, we’re consistently at 3.7% to 4.3%,” explains Brown. “But just because you have organic matter doesn’t mean it’s available to the plants right away.”

To succeed, Brown has had to think about profit differently. Some crops are not as profitable as others, but are needed to help the overall system.

Peas aren’t overly profitable, but lower input costs for subsequent crops. Also important to Brown are the long-term benefits he can leave for his son, Paul.

“I’m a conservationist first and a farmer/rancher second,” Brown says. “We need to improve the resources for future generations. Fortunately, if you do that, it also will improve your bottom line.”

And that’s one thing he knows from experience. “We were on the verge of going broke after those 4 years of crop failure,” Brown recalls. “But through the changes that situation brought on, I’ve seen the profitability that can come from improving soil health.

“The profitability that can arise from focusing on soil health and sustainable systems is unbelievable. With input costs rising like they are, producers need to focus on their soil resources and become least-cost producers.

“Nitrogen is free. You just have to plant crops that produce it. Don’t complain about input costs — do something about it. Diversify.”

Diversity Above, Below Ground Feeds The Soil And Crop