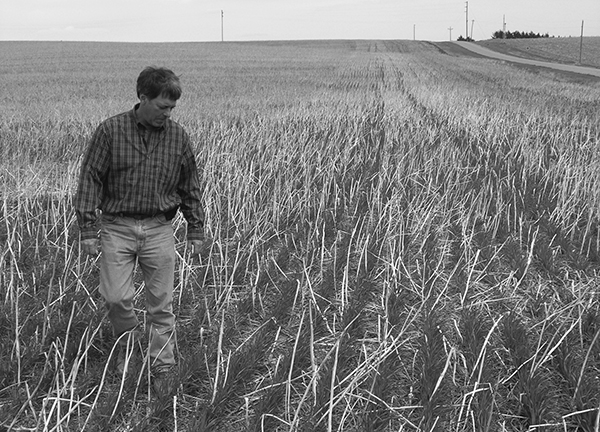 Randy Rink used to have the typical Midwestern crop operation. He rotated corn and soybeans. With this 2-year rotation, Rink would disc corn stalks once in the fall, and plant soybeans in the spring. The next year, he would no-till corn into soybean residue.

With this practice of minimum tillage, Rink says he witnessed the erosion of soils from his hillside farmland.

Today, there’s nothing typical about Rink’s 2,000-acre farming operation. While 80% of his acreage might be in corn or soybeans, now you’ll find winter wheat, field peas, proso millet or cover crops as part of the rotation.

Plus, he’s 100% continuous no-till. You’ll even find him no-tilling corn on corn with a 20-inch-row planter.

Farming on highly erodible land near Pender in eastern Nebraska, Rink is also sold on the value of always having something growing to hold the soil in place. He loves to see earthworms in every shovel-full of dirt and needs residue to maintain their populations.

“Basically, my involvement in no-till started when I heard Dwayne Beck speak. What caught my attention was that his no-till ground was able to catch 2 inches of rain in 15 minutes,” Rink says. “So I talked to Dwayne and he told me I needed to get cereal grains into my rotation.”

Rink switched to a 6-year stacked rotation of 2 years small grains (oats followed by winter wheat), 2 years corn and 2 years soybeans. Today, his program is a 5-year rotation of:

Premium content is for our Digital-only and Premium subscribers. A Print-only subscription doesn't qualify. Please purchase/upgrade a subscription with the Digital product to get access to all No-Till Farmer content and archives online. Learn more about the different versions and what is included.
KEYWORDS 20-inch corn canola Cover crops CurveTine Dawn Nebraska organic matter proso millet Randy Rink rotations