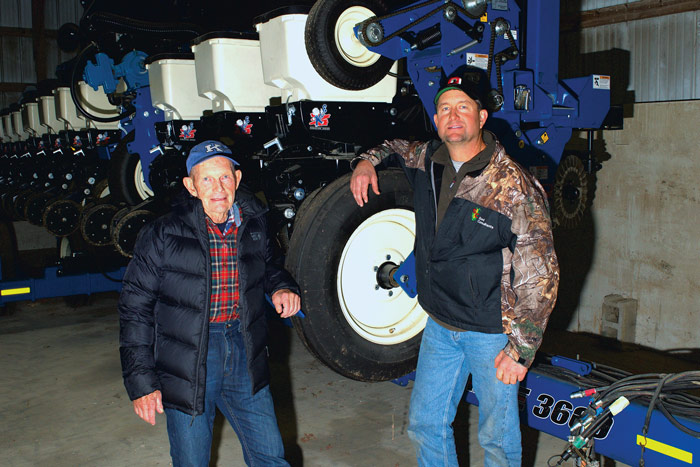 The Uetrecht family is managing moisture with cover crops, tile and long-term no-till to boost corn and soybean yields and keep more of their rich soils on the farm.

Pictured Above: PRESERVING SOILS. Dan Uetrecht (left) and his father Vincent credit long-term no-till, cover crops, filter strips and tile for helping them cut down on soil erosion and boost yields on their farm near Oregonia, Ohio. The farm, which backs up to the Caesar Creek Lake, also has several creeks running through it

Every no-till operation has its challenges. For Dan Uetrecht and his father, Vincent, it’s dealing with moisture.

But with a time-honored recipe of no-till practices, cover crops and extensive tiling, the father-and-son team have turned Uetrecht Farms into one of the most productive no-till operations in Warren County, Ohio.

During tiling projects they’re seeing the fruits of long-term no-till practices with abundant earthworm populations. Soil organic matter levels have increased from 2.5% a number of years ago to an average of 3-3.5% across the farm.

“It just seems like when we’re planting, the consistency of the soil is loose and good,” Dan says. “And when we harvest in the fall the fields have structure to them and hold up the equipment better.”

Part of a Movement

Vincent Uetrecht and his family have been part of what’s been described as the biggest land preservation movement in the Miami Valley area since the formation of public park districts in the mid-1900s.

Vincent, a long-time supervisor of the Warren County Soil and Water Conservation District, helped to promote no-till in the area as a way to reverse soil loss taking place.